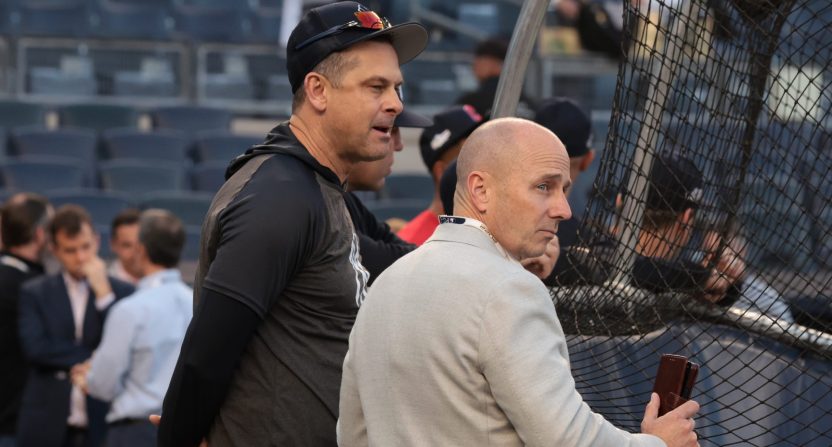 Aaron Boone got another big vote of confidence from the New York Yankees Friday.

Yankees general manager Brian Cashman praised his manager at a media conference at Yankee Stadium, saying Boone “did a great job” this season.

“His process is good,’’ Cashman said (via Dan Martin, New York Post). “He’s really good. And he’s not afraid to deal with the obvious in the biggest market, which is talking through it to the best of his abilities when they don’t work out. But I support him 110%.”

All the haters who were calling for Boone’s head after the Houston Astros swept the Yankees in the ALCS probably don’t want to hear Boone’s positive job evaluation. Yet Cashman isn’t alone in praising the veteran manager. Team owner Hal Steinbrenner told the AP last month that the team is sticking with Boone, saying, “I believe he’s a very good manager.”

Some of Boone’s strategy came into question in the postseason, especially his management of the pitching staff. Cashman especially appreciated how he dealt with the criticism when things didn’t work out.

“Also it comes with the territory, being able to take the criticism or standing up and talking about why you make the decisions you make,’’ Cashman said.

“I certainly believe in Aaron Boone and know he’s paid to make difficult decisions on the run. I know a lot goes into them. Every one he makes, am I going to agree with? The answer’s obviously not going to be yes. But I know I’m certainly not capable of managing a major league team. There’s very few people that are. I think he’s really good at it.”

Boone is 427-281 in five seasons at the Yankees helm. Of course, anything short of a championship is often viewed as a failure there. And while the Yankees have made the playoffs every year since Boone took over, New York has not played in the World Series since 2009.