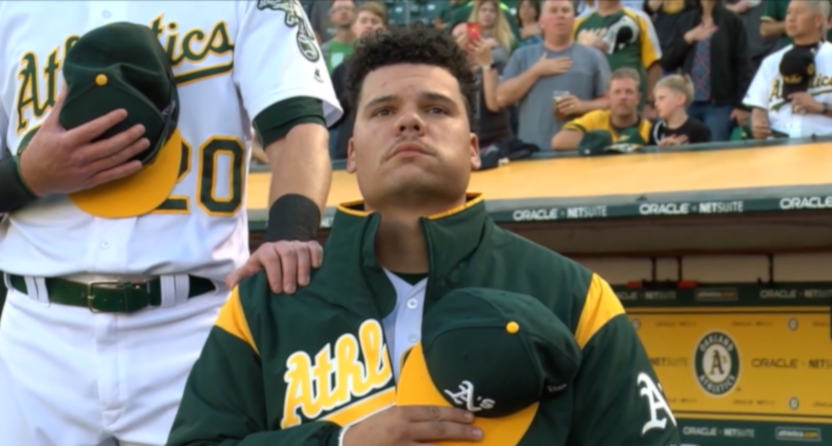 The racial injustice protests across the U.S. in the wake of the killing of George Floyd have led to a lot of sports implications, from current and former athletes participating and commenting on protests to current athletes deciding to kneel for the national anthem or wear social justice messages on their jerseys. HBO’s monthly Real Sports with Bryant Gumbel already examined some of this (and the ongoing effects of the COVID-19 pandemic) in a remarkable June special, but their upcoming episode Tuesday (debuting at 11 p.m. ET/PT on HBO) has an interesting examination of it from a different perspective, namely that of New York Mets’ catcher Bruce Maxwell.

Tuesday’s episode will feature correspondent Soledad O’Brien interviewing Maxwell, who made headlines in 2017 by becoming the first MLB player to kneel for the national anthem (while he was with the Oakland A’s, as seen above). That didn’t go well for him, though. Maxwell took a ton of racist abuse afterwards and faced death threats, and months afterwards, he was arrested for aggravated assault after pointing a gun at a woman delivering a food order to him. He eventually pled guilty to disorderly conduct and tried to resume his MLB career, but that didn’t go well, and he wound up having to go to the Mexican League.

After success there, though, Maxwell made it back to MLB with the Mets, signing with them last month. And his comments to O’Brien in Tuesday’s Real Sports segment are quite interesting, illustrating how tough the road has been for him. The comments from Maxwell, and his mother Dannie Spina, on the backlash to his 2017 decision to kneel are particularly notable; here’s a look at those.

Maxwell: There’s a older gentleman standing above our dugout. And he said, “Fuck you n****, you don’t deserve to be on that field.”

O’Brien: You got death threats.

Spina: Someone had said something about trying to find his sister in Texas and blowin’ up the gym where she was coaching. All this young man did was kneel. That’s all he did.

The segment as a whole is well worth watching. It illustrates the abuse Maxwell took growing up as an African-American baseball player in Alabama, the isolation he felt at times in MLB, what his reaction to Colin Kaepernick kneeling was, what exactly led to him pulling that gun in 2017 (he says it was a reaction to the death threats he’d received, and he’d forgotten about the food order he’d placed), the struggles he had getting back to MLB, and the complicated emotions he and his family have now at seeing kneeling and protests becoming more commonplace. But Maxwell’s comments on the threats he received are perhaps especially interesting, and they show the cost of making this kind of protest, especially back in 2017. Here’s a trailer for the segment:

The full segment with Maxwell can be seen on Real Sports Tuesday night on HBO at 11 p.m. ET/PT.