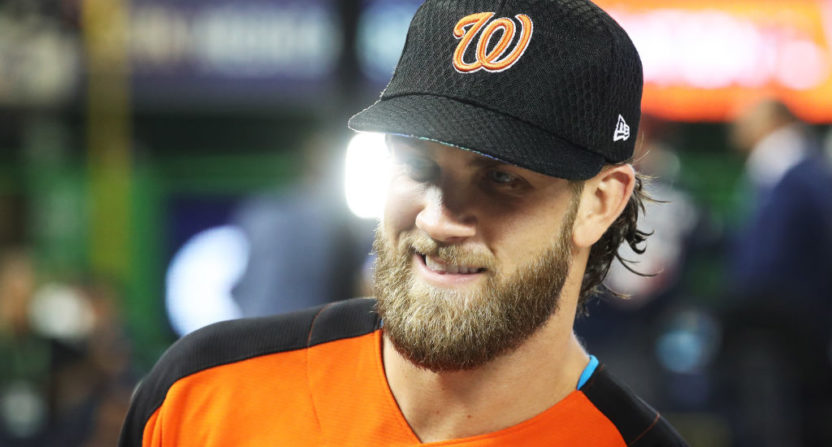 The Major League Baseball All-Star Game. It’s a tradition unlike…well, actually, it’s kinda like a lot of other all-star games.

Over the years, as interest in the sport have waned and cable TV and the internet have taken our attention elsewhere, ratings for the Midsummer Classic have been on a fairly steady decline. While the 1980 battle between the National League’s and American League’s finest drew a rating of 26.8 and 36,270,000 viewers, last year’s contest was the lowest-watched in history with only 8,707,000 people tuning in (5.4 share).

MLB has tried many things to boost the ratings (none more infamous than tying the outcome of the game to World Series home-field advantage, which is thankfully over), but perhaps there aren’t many things that the league can do to drum up interest so long as the game remains in its current format.

Washington Nationals slugger Bryce Harper thinks that maybe the time has come to take the long-standing format of league vs. league and give it a rest. In his opinion, it would be cool to see a schoolyard-style draft for the all-star teams.

“It’d be great if let’s say the two leading vote-getters by the fans did a draft system and could pick from both sides,” he said Monday. “So I could be facing Max Scherzer today — I mean, nobody sees that. It would be a lot of fun to do something like that to make it a little more competition to face somebody on your team, like if [Clayton] Kershaw was facing Justin Turner, or Chris Sale facing Mookie Betts. That’d be a lot of fun.”

On one hand, Harper’s idea has a hard wall to climb called tradition. Major League Baseball isn’t above changing with the times, but those changes often come gradually and after careful consideration. This is still the same entity that has different rules for the AL and NL despite the fact that they play in the same broader league. Logically, they should just play under the same set of rules just to make life easier for everyone, but tradition has dictated otherwise. So to take the All-Star Game and blur the lines between the American and the National is about as untraditional as it gets, and you can expect a lot of pushback on that.

On the other hand, did you not see that ratings trend? Interest in this game is at an all-time low and it’s hard to believe that most changes, even this one, will ever get that interest back to pre-cable numbers. That said, having Harper and Yankees’ home run machine Aaron Judge walk out to the pitcher’s mound, stare down every other All-Star, and start selecting them one-by-one for their teams sure sounds like the kind of interesting experiment that would make people tune in. As Harper notes, you could see teammates vs. teammates and iconic veterans side-by-side in ways you couldn’t otherwise. Since the outcome of the game no longer “matters,” why not?

This isn’t even a new idea. The NHL and NFL have both experimented with draft-style all-star games.

Ultimately, Harper says he’s just happy the World Series caveat is no longer involved so that players can “come in and relax and enjoy what we do.” It’s the only baseball game they’ll play between April and October that doesn’t matter, so why not have some fun with it? Perhaps one day we’ll see Harper’s idea play out. Just don’t expect tradition to let it happen quickly.