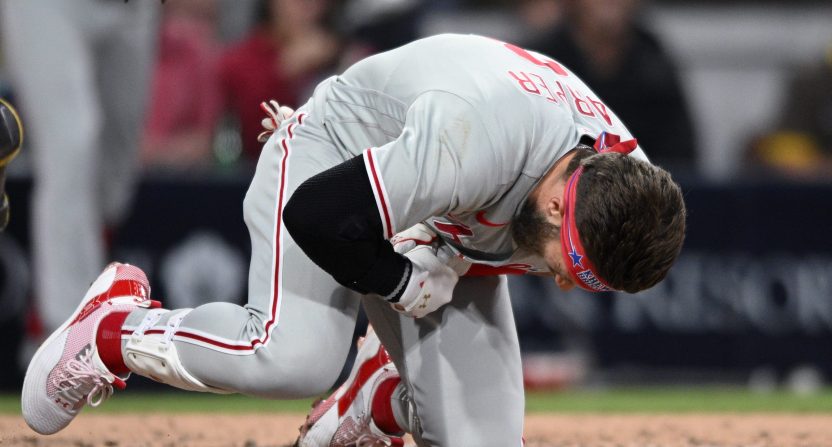 Harper was hit in the thumb by an errant pitch from San Diego’s Blake Snell. Later, Todd Zolecki of MLB.com reported that Harper had fractured his left thumb.

Bryce Harper takes a pitch to the hand and exits the game.

Saturday’s win moved Philadelphia’s record to 38-35, only 2.5 games back of the St. Louis Cardinals and Milwaukee Brewers — who are presently tied for both the National League Central lead and the third Wild Card spot in the National League — and two behind the San Francisco Giants.

But while the Phillies are well within striking distance, replacing Harper’s bat in the lineup will be next to impossible. Harper is not only the reigning NL MVP but is hitting .318/.385/.599 on the season with 15 home runs. Over his last 162 games, Harper’s numbers have been video game worthy.

There’s no replacing that.

Naturally, MLB fans were saddened to hear about Harper’s injury.

Hate to see one of the best in the game go down. Doesn’t matter what team they play for. Injuries have killed the NL East this season. https://t.co/kTC9vxx467

Losing Bryce Harper is catastrophic for the Phillies. He was among the most fearsome hitters in baseball this season, on pace to match or exceed his MVP-winning totals from 2021, and that kind of production is irreplaceable.

A brutal blow. No other way to slice it.

bryce harper saying he feels bad for the fans and organization after fracturing his thumb just shows what kind of person he is.

this team has to win for him. show up.

While Harper was initially visibly upset, he quickly calmed down and accepted Snell’s apology. Also, after the game, Harper said that he and Snell had exchanged text messages.

Imagine being the greatest hitter in the sport and your season could potentially be over.

(more from Harper on the HBP) "It's a bummer that it happened, but (Snell) is a great player and a great human being as well. I wish him the best, I told him that as well. Keep throwing the inside fastball because it sets up the slider really good."

If there’s a sliver of hope to be had regarding the severity of the injury, it’s that in the immediate aftermath, it was not known if surgery would be required.

Dave Dombrowski said they won’t know how much time Bryce Harper might miss, if he will need surgery, etc., until he is evaluated further. In the short term, Mickey Moniak will join the team. They hope he can arrive before tomorrow’s game.

The hope is obviously that surgery won’t be needed and that Harper will not miss the remainder of the season.

That said, even the best-case scenario will still leave Harper out for a substantial amount of time. That will not only be a significant blow to Philadelphia’s postseason hopes but will also mean one of baseball’s best players will not be on the field for at least several weeks.