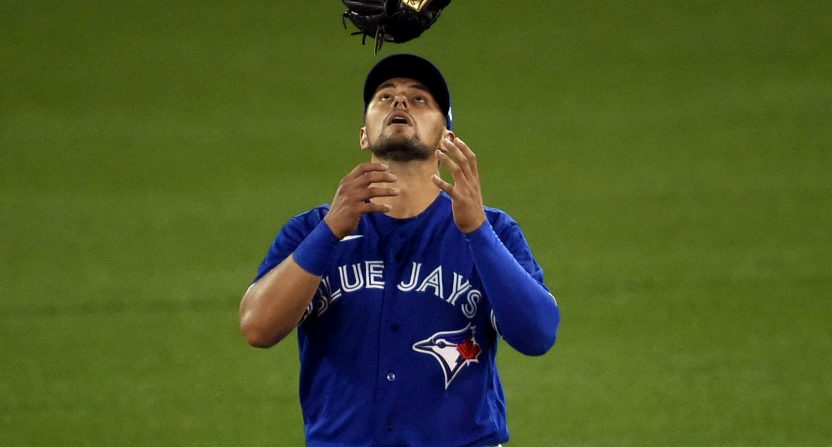 When a professional sports franchise from Buffalo, NY tried to take its show to Toronto, Ontario, it was deemed a failed experiment. The Toronto Blue Jays might find out what happened when you try it the other way by, albeit briefly, becoming the Buffalo Blue Jays.

That’s the rumor, according to Mike Harrington of the Buffalo News. Harrington reports that the Blue Jays have reached out to the Buffalo Bisons, their AAA affiliate, to “examine the possibility of Toronto’s home schedule being played in Buffalo this summer.” That would mean the Blue Jays would play their home games in the shortened 60-game season at Sahlen Field, which has a capacity of around 16,600, though that’s something of a moot point given the lack of fans due to the  Covid-19 pandemic.

The most immediate question is, why do the Blue Jays feel like they need to play in Buffalo instead of Toronto? Like so many things right now, blame it on the pandemic. As the only MLB team located outside of the United States, travel to and from Toronto would be something of a nightmare for opponents. Right now, the Canadian government is mandating a 14-day quarantine for anyone who enters the country. That makes it fairly impossible for any team, including the Blue Jays, to travel between the U.S. and Canada and expect to play consistent baseball games.

The Blue Jays have proposed an alternative solution to Canadian officials, which would see players taken directly from the airport to the Rogers Centre and self-quarantined in the hotel connected to it. However, that doesn’t seem to be convincing the government yet and the potential for players to be fined upwards of $750,000 or even jail time for breaking quarantine doesn’t make it worth it just to play baseball.

All summer isn’t gonna happen. Not an option

So while playing in Buffalo certainly sounds more feasible, it presents a whole new slew of issues that would need to be dealt with. Sahlen Field is a solid minor league ballpark but it’s hardly “major-league quality.” The stadium lacks LED lighting and would require a completely upgraded lighting system for TV broadcasts, especially since 24 of the Blue Jays’ 30 scheduled home games would take place at night. Also, they only have about three weeks to make this happen, which sounds a bit wild.

And of course, there’s the fact that it’s a smaller stadium than Major League Baseball is used to, which means smaller rooms, club houses, hallways, press boxes, and private quarters. Given that its unlikely fans will be in the stadium, it can be retrofitted to make room for those who need to be there, including media, team staffs, umpires, and more.

A statement sent to me from @MayorByronBrown on the #Bluejays playing in Buffalo. pic.twitter.com/66XogJ2TgB

The Buffalo News also reported that the Jays’ backup plan to their backup plan would have them play at their spring training facility in Dunedin, FL. That’s all well and good except for the fact that Florida is absolutely spiking right now in terms of Covid-19 positive tests. In terms of places you don’t want to be if you’re trying to avoid Covid-19, Florida is at the top of the list.

The Blue Jays will need to decide where they want to call home quickly because the season begins in a matter of weeks. Lucky for them they open on the road, but their first home game will be here before you know it. As for where “home” is, well, that’s the tricky part.