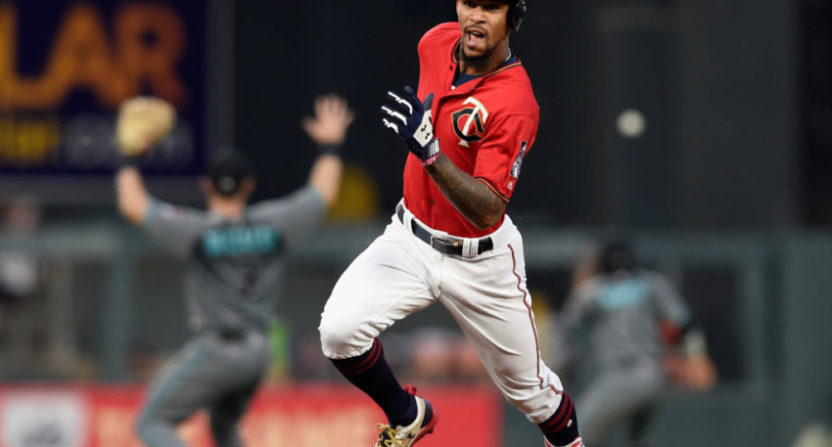 Byron Buxton is one of the most electrifying players in baseball, even if most fans don’t realize it.

The Twins’ centerfielder is not a very good hitter (.240/.310/.359 on the season), but he’s one of the best defensive outfielders alive, and he’s got some serious wheels. On Friday, Buxton put on a show in his team’s win over the Diamondbacks, whacking a triple in the second inning and a game-tying inside-the-park home run in the fourth.

It’s safe to say that Buxton’s triple would have been a double for the average runner, and there’s no question his inside-the-parker would have had most players stopping at third. Here’s some video:

Here's both Byron Buxton's triple and inside the park homer. #MNTwins pic.twitter.com/dNbUHEjRYh

It turns out Buxton made a little (short-term) history with his inside-the-park homer. According to MLB.com, he rounded the bases in 13.85 seconds, breaking his own Statcast-era record (which was 14.05) for fastest time from home to home. Even crazier, he said he could have gone faster.

“My strides got messed up [rounding third],” Buxton said. “I usually try to count my strides out as I’m running. I took a wide turn at second and think it kind of pushed me out to stutter step at third.”

Buxton’s triple was also noteworthy for its speed. On that play, he made it from home to third in 10.56 seconds, the third-fastest time of the Statcast-era.

Per Baseball Savant, Buxton is the second fastest sprinter in baseball, narrowly trailing the Reds’ Billy Hamilton for the top spot.

Buxton also hit a double in Friday’s game, falling a single short of the most exciting cycle you’ll ever seen. Still, he probably won’t complain about a triple, an inside-the-parker and a new Statcast record.