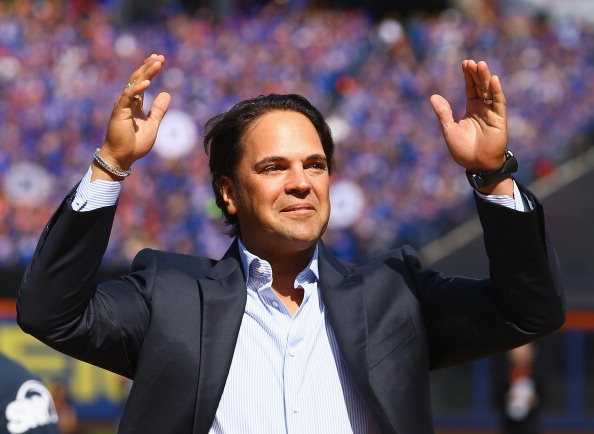 There’s a lot to say about the Baseball Hall of Fame voting process: The voting bloc is unwieldy, many rules are counterintuitive, some ballots are laughable, on and on.

But one thing you can’t say is that it doesn’t yield results.

With Wednesday’s announcement that Ken Griffey Jr. and Mike Piazza will comprise the Cooperstown class of 2016, the Hall continues a run of nearly unprecedented productivity. In the last three voting cycles, the BBWAA has now elected nine players, all abundantly qualified, the most in any three-year period since 1954-56. This group of stars represents the best infusion of talent to the Hall since the first few years of voting in the late-1930s, when the BBWAA had 50 years of baseball to catch up on.

Of course there are issues with Wednesday’s results — Jeff Bagwell should be in by now, Mike Mussina’s vote total remain puzzlingly low, etc. — but the BBWAA continues to do its job of electing worthy candidates.

Despite an ongoing ballot logjam, Cooperstown has not descended into crisis like some observers once predicted. Hall of Fame hysteria hit its apex in January 2013, when the writers elected no one, despite loads of seemingly strong choices. With alleged PED-users nowhere near induction and increasingly clogging the ballot, it seemed the backlog would become a debilitating problem.

But though borderline candidates like Edgar Martinez, Larry Walker, Curt Schilling and Mussina have progressed more slowly than they might have without so many big names on the ballot, the writers have overcome the chaos. Not only have they voted in no-brainers Randy Johnson, Greg Maddux, Pedro Martinez, Frank Thomas, and Griffey, they’ve lifted less-slam-dunk choices Tom Glavine, Craig Biggio, John Smoltz, and Piazza as well.

This year’s ballot contained a number of Hall-caliber players who won’t get a plaque in Cooperstown this summer, but Cooperstown’s history is full of great players who hung around the ballot a while before reaching the requisite 75%. Eddie Mathews lasted until his fifth ballot, Gaylord Perry until his third, and Gary Carter his sixth. Bert Blyleven famously earned induction on his 15th and final try. But once you’re in, no one cares whether you made it on your first ballot or eighth.

And most of the qualified candidates on the 2016 ballot have realistic chances of future induction. Bagwell, who leapt to 71.6% in this year’s voting, figures to get a plaque next year, along with Tim Raines, a deserving candidate who will be in his final year of eligibility. After that, Mussina, Schilling, and Trevor Hoffman should be well-positioned, and Martinez has a shot as well.

Sure, Barry Bonds and Roger Clemens will soon fade off the ballot (unjustly), but they’re a special case. And yes, advanced-stat darlings Alan Trammell (who fell off the ballot this year), Larry Walker, and Jim Edmonds (who was one and done this year) always stood little chance at BBWAA induction, but they’re exactly the types of candidates who typically receive further consideration for the Veterans Committee.

The Veterans Committee, designed to clean up after the BBWAA, is often forgotten in complaints about Hall of Fame voting. ESPN recently posted the following highly misleading graph about active Hall of Famers throughout history. 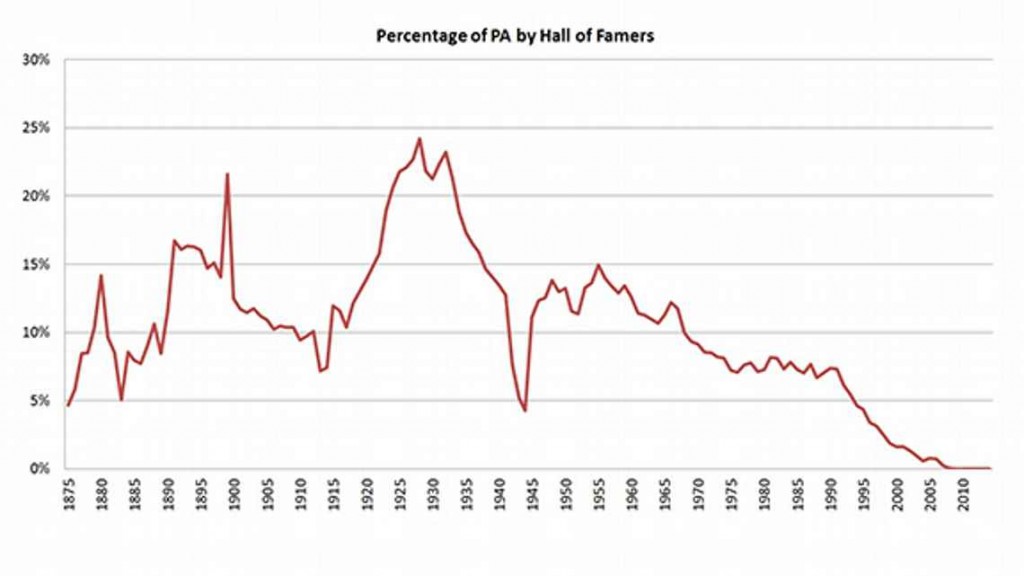 While on its face alarming, the graph doesn’t account for the Veterans Committee, which has yet to fully parse through the last 30 years and induct the players the BBWAA missed. Much of the spike in Hall of Famers during the 1930s owed to a Veterans Committee rampage in the 1970s; give it some time and borderline guys from the 1970s, 80s and 90s will start to sneak in the backdoor.

In the ESPN article where you’ll find that graph, Dan Szymborski, who is one of the most insightful Hall of Fame commentators around, lists modern players who will likely be snubbed by the BBWAA but then compares them to old-timers who entered through the Veterans Committee. Trammell, Edmonds, and Walker won’t be voted in by the BBWAA, but most borderline candidates aren’t. Luckily, there’s another, more inclusive (sometimes too inclusive) avenue.

Of course the BBWAA has erred plenty over the years, sometimes dramatically. For example, there’s no way Lou Whitaker, Bobby Grich, Kenny Lofton, or Kevin Brown should all have been one-and-done on the ballot. But by and large, the writers get it right. They hit on the obvious candidates and eventually come around on the secondary ones. Your favorite fringe candidate’s inability to make headway in BBWAA voting doesn’t mean the system is failing, at least not any more than it has “failed” over the 85 years.

There’s a feeling among the loudest baseball writers and fans on the Internet that a ballot can be objectively good or bad based on how closely it aligns with advanced stats. This judgment is understandable — value stats like WAR are as close as we have come measuring a player’s total impact — but also idealistic and slightly anti-Democratic. Disagreement is natural, especially when it comes to something as subjective as baseball and shouldn’t be viewed as an existential problem.

An analytically inclined fan or writer would argue Larry Walker had a much better career than Fred McGriff and that anyone who votes for McGriff over Walker is foolish. But if an older-school scribe thinks the Hall is about home runs more than advanced stats the average fan doesn’t understand, he’s not inherently wrong. The Internet baseball establishment understands closers provide relatively limited value by pitching only 70 innings a season, but if a BBWAA member thinks Trevor Hoffman is a larger part of baseball history than Mike Mussina, his opinion probably doesn’t deserve scorn.

Even when voters make their choices “from their gut” and brag about avoiding research, that doesn’t necessarily indicate they don’t take the process seriously, just that they have a different idea of what being a Hall of Famer means.  Writers with different worldviews should be hailed as a feature of the BBWAA or at least accepted as an inevitability, not derided as a bug.

Of course some alarming ballots are made public every year (By the way, huge thanks @NotMrTibbs for your service), but any group of 450 will produce some with extreme opinions. A few oddballs here and there don’t dramatically affect the voting results, and they certainly don’t undermine the credibility of the BBWAA as a whole.

The Hall of Fame process is not perfect; the 10-player limit makes no sense, and a directive from the top about PED use could only help. Every year, we get so caught up in day-by-day exit-poll updates and breathless ballot shaming that we convince ourselves the Hall of Fame is broken beyond repair. But for the third straight January, the results are in and multiple stars are headed to Cooperstown. The BBWAA is doing a fine job with Hall of Fame voting, even if it doesn’t always feel that way.