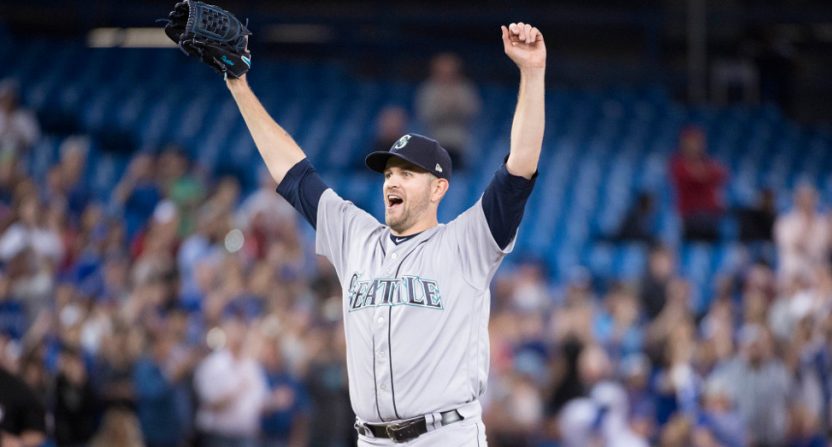 The third no-hitter of the 2018 MLB season came Tuesday night, and it came in a 5-0 Seattle Mariners’ win in Toronto, with Canadian-born pitcher James Paxton shutting down the hometown Blue Jays. That followed an April 21 no-hitter from Sean Manaea of the Oakland Athletics and a May 5 combined no-hitter from four Los Angeles Dodgers pitchers. And it came thanks in part to an incredible diving defensive play from Mariners’ third baseman Kyle Seager to end the seventh inning:

WHAT A PLAY BY KYLE SEAGER!

That’s a great effort, and an impressive throw as well (to say nothing of the grab by first baseman Ryon Healy). And it’s appropriate that Seager and Healy later capped this off in style, combining again to record the final out:

The final out of James Paxton's no-hitter pic.twitter.com/SYJeY6w3VZ

This is an impressive moment for Paxton, the Ladner, B.C. native who shone in the British Columbia Premier Baseball League for the North Delta Blue Jays, then starred at Kentucky. And it’s interesting that it came against the Blue Jays. They initially drafted him (37th overall) in 2009, but he turned them down to head back to the Wildcats; however, the NCAA ruled him ineligible thanks to contact with agent Scott Boras. Paxton instead wound up pitching for the independent Grand Prairie AirHogs in the spring of 2010 before the Mariners took him in the fourth round of that year’s MLB draft. He then worked his way up through the team’s organization, making his debut in September 2013 (where he went 3-0) and becoming a regular member of the MLB club in 2014.

Paxton has battled plenty of injuries and other challenges since then, though, missing significant time in both 2014 and 2015 and even being optioned to the minors in 2016. But he soon battled back, and had an impressive 2017 campaign, including an AL pitcher of the month nod in July. Injuries struck again after that, but Paxton has been off to a great start this year, including a 16-strikeout performance (a record for a Canadian-born pitcher) in a game against Oakland last week (which Seattle still somehow managed to lose). And he’s been in the headlines for other reasons too, including a bald eagle landing on him ahead of a game against the Twins in April. But this is perhaps the best MLB moment yet for the 29-year-old Paxton. And it’s notable that it came in Canada against the Jays, the team that once drafted him so long ago.