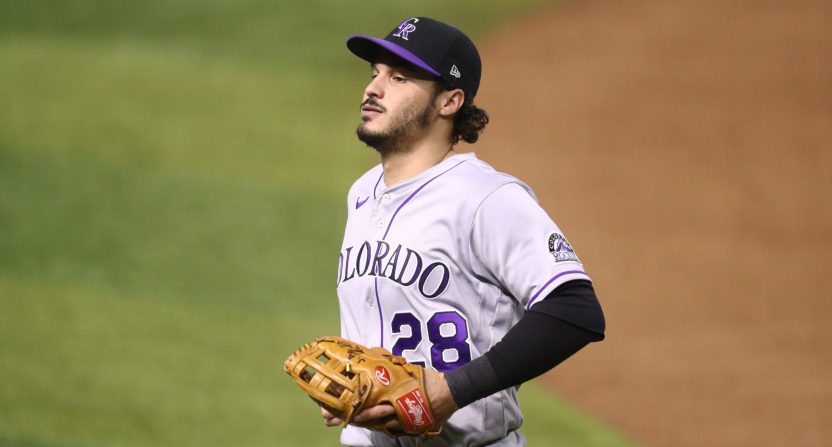 Rosenthal reports that the trade — pending approval from MLB and the Players’ Union — features the Rockies sending the Cardinals “significant cash” believed to be in the range of $50 million, and “Arenado will be deferring money.”

BREAKING: Cardinals have agreed to acquire Nolan Arenado from Rockies, sources tell @TheAthletic. Deal pending approval from both MLB and players’ union; Rockies sending Cardinals significant cash, believed to be in $50M range, and Arenado will be deferring money.

Arenado has a full no-trade clause, and he has an opt-out in his contract after the 2021 season. However, the Cardinals were surely an appealing destination to Arenado as a contender.

Arenado had six years and $199 million remaining on his contract (an eight-year, $260 million extension signed with the Rockies in 2019), so this will apparently become (roughly) a six-year, $150 million deal for St. Louis. He’s owed $35 million per season in 2021-24, followed by $32 million in 2025 and $27 million in 2026. It’s unlikely Arenado — who turns 30 in April — would get more money than this on the open market after 2021, but you never know (maybe some organizations will decide to spend big by then after taking things slow in the pandemic market). Regarding the opt-out, the Cardinals surely wanted assurance that they would have team control of Arenado longer than 2021 if they were going to give up prospects to acquire him.

And it’s a lot of money to take on, so it’s understandable that the Cardinals insisted on the Rockies paying a decent chunk of the contract, with the Rockies then perhaps insisting on a higher trade return as a result.

While we don’t know what the return is yet, an Arenado trade makes an enormous amount of sense for both sides on the surface.

For the Rockies, well, they probably should’ve already traded Arenado.

Even with Arenado, the Rockies would have an awful roster that isn’t in the same universe as at least two teams in the NL West. And it’s hard to see how it would significantly change in Colorado’s favor in 2022 or 2023 (keep in mind that the Rockies aren’t exactly a top free-agent destination, especially for pitchers that want nothing to do with an arcade park at Coors Field). The sooner the Rockies face the reality of their situation and accelerate a full-on rebuild, the better. That meant dealing Arenado sooner than later for prospects. It’s a move that will both improve their farm system — in theory; we’ll see about the return — and add more payroll flexibility over the next several years, allowing them to set up for the mid-to-back half of the 2020s while the Dodgers and Padres rule the next several years.

And for the Cardinals, it’s seeing the opportunity to take advantage of an NL Central division featuring teams that are hardly trying. Without Arenado, the Cardinals look very mediocre like the Chicago Cubs, Milwaukee Brewers, and Cincinnati Reds (then there are the Pittsburgh Pirates, the only MLB team that currently looks worse than the Rockies). By adding Arenado, they’re still not near the level of the Dodgers and the Padres on paper, but they’re the clear team to beat in the NL Central. And winning the division immediately gives you a chance to make an October run.

Arenado had a rough 2020 season (.253/.303/.434, 76 wRC+), but so did a lot of stars in the bizarre, shortened 2020 season during a pandemic. He’d been an extremely consistent 5.9-6.7 WAR player — according to Baseball Reference — for five straight seasons before that. The five-time All-Star brings a powerful, high-contact offensive game, to go with remarkable defense at third base that has resulted in eight Gold Glove awards (he led MLB with 15 Defensive Runs Saved in 2020). He’d play alongside shortstop Paul DeJong — who was worth an NL-best 26 Defensive Runs Saved in 2019 — to give the Cardinals an elite left side of the infield. Also in that infield is six-time All-Star first baseman Paul Goldschmidt, who now gets some more help in the middle of the lineup.

The Cardinals become a heavy division favorite. And the Rockies finally accept where they are as an organization in an unwinnable NL West.

The Nolan Arenado-to-St. Louis trade is official. Other players in the deal have been informed. The return for the Rockies: Left-hander Austin Gomber and prospects Elehuris Montero (3B), Mateo Gil (3B), Tony Locey (RHP) and Jake Sommers (RHP).

Additionally, the Rockies are paying Arenado’s $35 million salary this season. Okay then.

Source: The #Rockies are paying Nolan Arenado's $35 million salary this season; $15 million is owed to the Cardinals in this calendar year, with the remaining $20 million deferred. @MLB @MLBNetwork