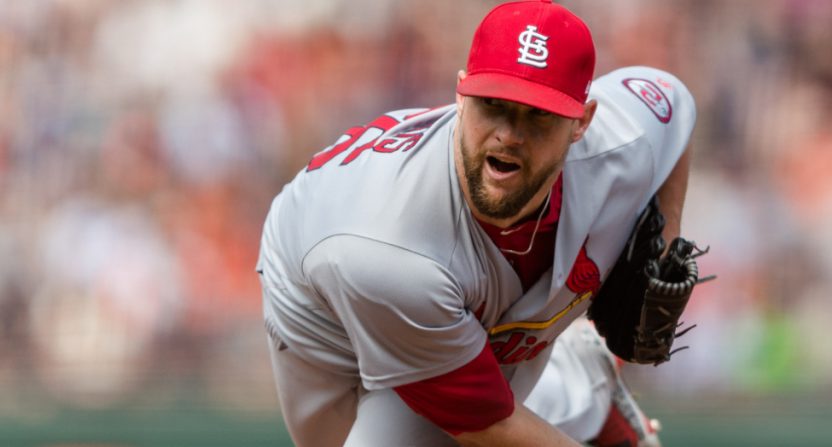 The St. Louis Cardinals are hovering just above .500 as they near the midpoint of the 2018 MLB season. In a way, that’s downright impressive given how dysfunctional their locker room sounds.

According to The Athletic’s Mark Saxon, embattled outfielder Dexter Fowler and manager Mike Matheny “barely talk and haven’t for months.” As Fowler struggles in the midst of the second year of a five-year, $82.5 million contract, it seems a curious tactic to basically shun him while spending almost every day together in the same dugout.

Even more curious, and a bit darker perhaps, is what we learned recently regarding pitcher Bud Norris and his relationship with youngster Jordan Hicks. Saxon wrote about how Norris is “leading the young Cards bullpen with a divisive old-school approach,” which ends up being a really nice way of saying Norris is, at best, a bully.

The 33-year-old Norris has been mercilessly riding 21-year old rookie Jordan Hicks since spring training, reminding him to be at meetings on time and publicly calling him out when he is lagging in any of the details a visitor might not notice, but other players do.

In the piece, which is behind a paywall, Saxon delves into how the 33-year-old Norris has been “mercilessly riding” 21-year old rookie Jordan Hicks since spring training. While that might include somewhat innocuous things such as reminding him to be at meetings on time, it also seems to include public embarrassment and other chastising. Saxon also mentions that Norris trades in “badgering” players such as Hicks and likes to teach them in “the harshest way possible,” though details are not included.

For his part, Hicks does not appear to be enjoying the treatment. When asked if he thinks the tactics will pay off for him later on in his career, he responded, “I have no idea. No comment.”

Some might chalk this up to “good old-fashioned baseball rules” when “men were men.” However, there’s an added wrinkle worth noting, and that’s that Norris’ reputation precedes him. Take his comments back in 2015 when, as a member of the San Diego Padres, he discussed his feelings about international baseball players coming to America and whether or not they do a good enough job assimilating.

“I think it’s a culture shock,’’ Norris said. “This is America’s game. This is America’s pastime, and over the last 10-15 years we’ve seen a very big world influence in this game, which we as a union and as players appreciate. We’re opening this game to everyone that can play. However, if you’re going to come into our country and make our American dollars, you need to respect a game that has been here for over a hundred years, and I think sometimes that can be misconstrued. There are some players that have antics, that have done things over the years that we don’t necessarily agree with.

“I understand you want to say it’s a cultural thing or an upbringing thing. But by the time you get to the big leagues, you better have a pretty good understanding of what this league is and how long it’s been around.’’

Where was Racism Watch Dog when we needed him in 2015?

However, the real problem in the clubhouse might not be Norris but the person in charge of making sure all of the players are taken care of. Manager Mike Matheny was quoted in the article as not only being a fan of the way Norris conducts himself but as something who thinks the modern game, and its players, have become too soft.

“Matheny sees Norris’ actions as an effort to carry on the dying tradition of teaching younger players in the harshest possible ways. Matheny himself faced that on the Milwaukee Brewers when he broke in as a young catcher 24 years ago.

“I think the game has progressively gotten a little softer,” Matheny said. “Man, it had some teeth not that long ago.”

Also noted in the Athletic article was that Matheny basically asked Norris to be a bullpen narc and report back to him about his teammates.

Sounds like a very sound employment environment you’ve got there, Cardinals.

Of course, if there was any MLB locker room where this kind of thinking would take root, it would be St. Louis. The franchise, many fans, and even some local media love to extol their old school mantras and “The Cardinal Way.” It’s the perfect environment for a manager who thinks players today aren’t tough enough and a journeyman pitcher with a chip on his shoulder who wants to flex his muscles over younger, better players.

Given the potential that a hard-throwing pitcher like Jordan Hicks presents, you’d think that a baseball franchise would want to go out of its way to make sure he was taken care of and feeling good about his place in the organization. Not so for the Cardinals. Ultimately, everyone in the clubhouse will be measured by wins and losses, but in the meantime let’s hope that an adult starts checking in on things to make sure something really dumb doesn’t happen in the name of “toughening up” rookies.