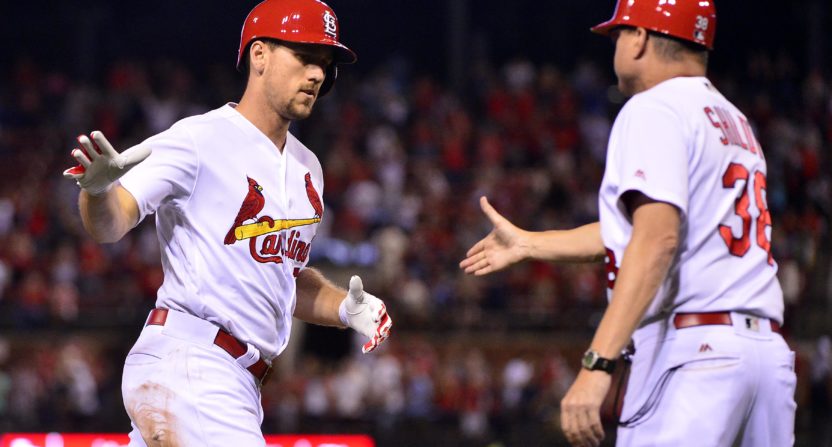 The St. Louis Cardinals and Oakland Athletics reportedly agreed to — at least the framework of — a deal on Wednesday night that will send Stephen Piscotty to Oakland for two prospects.

Sources: A’s are in agreement on a trade to acquire Stephen Piscotty. Two minors leaguers go to cards in deal.

Updated update: A’s back to nearing trade for Cardinals’ Stephen Piscotty – plus which two prospects St. Louis was pushing for: https://t.co/7Yw5toZuiz via @sfchronicle

Piscotty was very impressive in his first two big-league seasons with the Cardinals in 2015 and 2016 (22 HR and a 2.9-WAR player in 2016), and that led the Cardinals to sign him to a six-year, $33 million contract extension in April. But Piscotty struggled in 2017, and much of that seems due to injuries he dealt with, along with a very difficult time he’s been going through emotionally.

Piscotty’s mother, Gretchen, was diagnosed with ALS in May. He then took about a week off from the team to spend time with his mom, and spoke to the media about it when he returned (via KSDK):

“My mom is very strong, and she’s going to battle,” Piscotty said. “And we’re going to be behind her.

“We watched all the games on the couch,” Piscotty said .”She thought it would be a fun, weird idea to have me there watching.”

Piscotty said the news made it hard for him to focus on the field, which prompted his decision to leave the team for a little less than a week.

Piscotty’s mother lives in Pleasanton, CA, located in the Bay Area. So the Cardinals made an effort to to work out a trade with the A’s or the San Francisco Giants to allow Piscotty to be near his mother.

Here’s what Cardinals manager Mike Matheny had to say as rumors about a potential trade to the A’s started to surface on Wednesday (via St. Louis Post-Dispatch):

From the great @dgoold, comments from Mike Matheny that make it clear Cards would like to help Piscotty get back to the Bay Area. Piscotty’s mom was diagnosed with ALS this year: pic.twitter.com/hi6Q5XWz9B

“I don’t know if I can empathize with Piscotty,” Matheny said. “You just hurt for him. You can’t even really go there to understand him and at his age and what it is that he had to endure or what that is like for a family. I think it’s really just understanding that it is very, very difficult. You let him know that you care. You acknowledge. You have compassion. We’re trying to be support for him, and we have to look to do anything we can.”

This is a great reminder of the actual human aspect of the business and that these decisions aren’t all based on statistics and dollars. The Ozuna move allowed the Cardinals to afford trading Piscotty, but they could’ve sent him anywhere and perhaps gotten a better prospect return from another team.

It’s clear the Cardinals were intent on working out a deal with a Bay Area team to get Piscotty near his ailing mother if they could, and — assuming the deal is officially completed — they were able to do so.