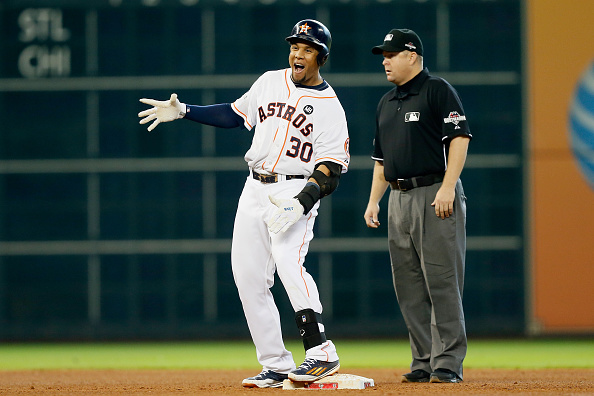 Things have not been going quite according to plan this season for the Houston Astros. Among the disappointments for the Astros so far this season has been Carlos Gomez, the energetic center fielder who has the ability to generate a certain swag level for his team when things are going well.

Gomez is hitting .220 with 31 strikeouts to just three walks in 95 plate appearances this season. This led Houston Chronicle columnist Brian T. Smith to pen a story that was published Wednesday under the headline “Carlos Gomez knows he’s a disappointment to Astros fans.” In it, Smith uses some quotes from Gomez which the center fielder feels were used in poor taste.

The quote using some mildly broken English was not edited as many quotes from players can be when a story is put together to allow it to have a smoother flow and a more coherent voice. The quote was a simple straight quote, which can be read below as it was printed…

“For the last year and this year, I not really do much for this team. The fans be angry. They be disappointed,” said Gomez as he roamed center field against the team with which he spent 2008-09.

Simply reading the quote without any real context to the reader may make it sound as though Gomez lacks the intelligence to use the English language properly. This is a flaw, because Gomez actually speaks English as a second language, although not as well as one who has spoken the language since learning to say “mama” and “dada.” Gomez may be able to deliver this thought clearly enough in English, but he sure seemed capable and able to deliver his thoughts more coherently in responding to the story on Twitter.

Gomez reacted to Smith’s story by sending him public tweets and defended his place on the team.

@ChronBrianSmith your intentions in your article were of real poor taste and had no affect on me. I am confident and proud of who I am.

@ChronBrianSmith Thankfully I have a great support system and great teammates who are always there for me. God bless you!

Gomez closed out his retort by suggesting Smith make use of Google next time to help him write his story.

There has been no public response from Smith following these tweets from Gomez, but here’s hoping Smith at least attempted to slide into Gomez’s mentions with an apology.