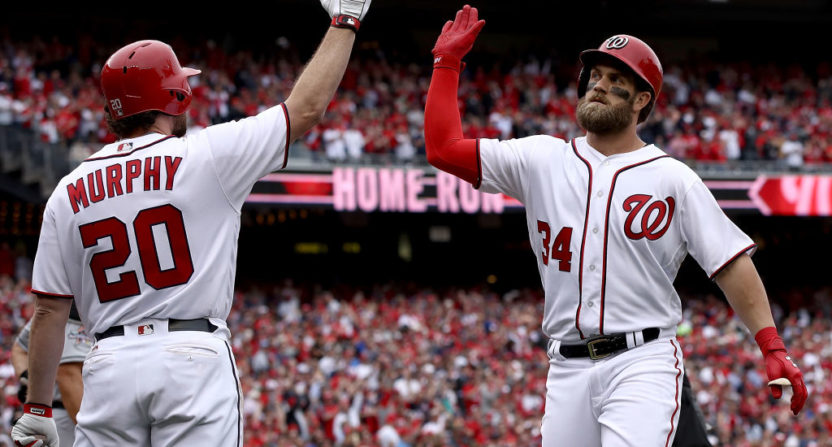 Welcome to The Comeback’s Major League Baseball playoff preview series, in which we tell you why each of the teams headed for the postseason has a chance to win it all. We have hit Clayton Kershaw and the Dodgers, as well as Justin Verlander and the Astros. Today, the NL East champion Washington Nationals.

For the second year in a row, the Washington Nationals were excellent this season in a way that felt almost boring. They didn’t set records or run off long streaks. They didn’t feud or fight. They faced no scandals. They made no blockbuster moves. Instead, they just won and won, leading the NL East from wire to wire and cruising to their fourth division title in six years.

And here’s the crazy thing: Amid that steady and unsuspenseful success, a whole lot went wrong.

The Nats endured a rash of injuries that would make even a Mets fan cringe. Adam Eaton missed most of the season, while Bryce Harper, Stephen Strasburg, Trea Turner, Jayson Werth, Joe Ross and Koda Glover all spent significant time on the disabled list. Meanwhile, the bullpen was a disaster for the entire first half of the season, blowing leads almost as fast as the offense could supply them and causing the only real drama this team ever faced. At times, it looked as if the relief corps was an unsolvable issue destined to sink an otherwise-strong roster.

The reason the Nationals can win the World Series next month is because those two colossal problems have been essentially corrected. With Harper fresh off the DL and Strasburg, Turner and Werth all healthy as well, Washington enters the playoffs at something close to full health. Yes, Eaton remains out, but Michael A. Taylor’s breakout means center field is still a strength — or at least not a weakness. And that bullpen that looked like a fatal flaw in June is now as dependable as any, thanks to July acquisitions Sean Doolittle, Ryan Madson and Brandon Kintzler, who have combined for a 1.90 ERA in Washington uniforms.

With those issues straightened out, there aren’t many holes on this roster.

No team in baseball has a lineup with as strong a core as Dusty Baker’s. In Harper, Daniel Murphy, Anthony Rendon and Ryan Zimmerman, the Nationals have four of the 18 most valuable offensive players in the National League, according to FanGraphs. Throw in Turner at the top, along with Werth and Taylor toward the bottom and you have the best one-through-seven of any order in the league. There’s a reason this team ranks first in the NL in OPS, second in runs scored and third in wOBA, despite the aforementioned injuries.

Here is what the Washington’s Game 1 lineup might look like, along with each presumptive starter’s 2017 wRC+ (for reference, a wRC+ of 100 is league average):

Pretty damn good. Throw in Adam Lind (127 wRC+) and Howie Kendrick (114 wRC+) on the bench, and you have a team that should score a ton of runs off any pitching.

The Nationals’ starting rotation is just as star-studded and just as productive as the lineup. Max Scherzer will probably win NL Cy Young thanks to a 2.55 ERA and 263 strikeouts in 197 1/3 innings. Strasburg may be brittle, but when healthy he’s a borderline ace who currently leads the NL in FIP. And after a highly uneven 2016 season, Gio Gonzalez has had arguably the best year of his career, with a 2.68 ERA in 191 2/3 innings. Tanner Roark had a disappointing campaign, but for a fourth starter he’s not bad at all. Overally, Nationals starters have posted a 3.59 ERA this season, third best in the Majors, despite a giant hole at No. 5 starter (which won’t matter in the playoffs).

If we have to identify a weakness for the Nationals, it’s their defense, which ranks 24th in baseball in defensive runs saved. Still, Washington’s glovework was not weak enough to prevent the Nats from allowing the second fewest runs in the NL this season. One way or another, this team keeps runs off the scoreboard as well as anyone.

Some people (particularly Cubs fans) will argue that Baker can’t win in October, but that assertion ignores that the manager has claimed one pennant and fell a fan interference and a botched double-play ball away from another. Baker has more than 1,850 wins in his managerial career — he knows what he’s doing.

Washington will finish this season with 98 or so wins, and the roster as currently constructed — with relative health and a rebuilt bullpen — is probably even better than that record. The Nats outpace their first-round opponent, the Cubs, in run differential and third-order win-loss record, and although they’ll be underdogs if they meet the Dodgers in the NLCS, it’s easy to look at the September regression up and down L.A.’s roster and conclude that Washington is a better team right now.

The Nationals have been preparing for October since it became apparent, sometime in May, that they had the NL East locked up. Now the postseason is here, and this roster is ready for it. Washington may not have led SportsCenter much this season, but it’s one of the very best teams in baseball nonetheless.

1 thought on “The case for the Nationals: Why Washington will win its first World Series”