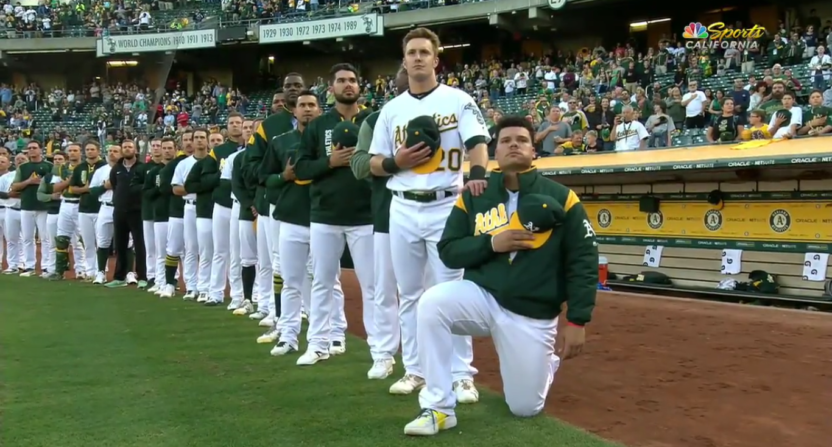 Oakland A’s rookie catcher Bruce Maxwell debuted in July of 2016, and 2017 has technically been his rookie season. He’s not a high profile player, hovering between replacement level and .5 WAR, depending on whether you’re on Baseball-Reference or Fangraphs. But in the middle of today’s whirlwind battle of words and tweets between the President of the United States and athletes of all colors and sports, Maxwell decided to take a stand.

A's catcher Bruce Maxwell is kneeling for the National Anthem. He's the first MLB player to do so. Maxwell has hand on heart, facing flag

Maxwell knelt for the anthem in Oakland prior to the A’s taking on the Texas Rangers.

A’s Bruce Maxwell just took a knee during anthem. He is the first in #MLB to do it. @sfchronicle @SFGate #baseball #Oakland #athletics pic.twitter.com/xJMeAskC4z

The African-American Maxwell was actually born in Germany, on a military base. As noted by the San Francisco Chronicle, earlier in the day on Saturday Maxwell took to social media to express his displeasure with Donald Trump’s spoken and tweeted insults towards athletes protesting American injustice and inequality:

The product of a military family, Maxwell placed his hand on his heart and faced the flag during the anthem while taking a knee before the game against Texas.

Saturday morning, Maxwell, who is African American, took a strong stand on Instagram against Trump’s remarks about NFL players who choose to kneel during the National Anthem.

After Trump’s comments urging NFL owners to fire any players who kneel for the anthem, Maxwell posted a tweet from Andrew Steinthal that suggested that all NFL players should kneel for the anthem on Sunday. Below the post, Maxwell added in a comment, “Yeah, f- this guy! Our president speaks of inequality of man because players are protesting the anthem! F- this man! Seriously on the highest platform for our country expressing that it is OK for there to be division of man and rights!”

Maxwell was born in Wiesbaden, Germany, when his father, who also is named Bruce, was stationed there with the Army. The younger Maxwell is highly patriotic – he took great pride in the July 4 uniforms and catcher’s gear he received this year – so his decision to kneel appears to be entirely in opposition to Trumps comments and in solidarity with the NFL players who have taken a knee for the anthem.

If you’re curious, that’s Mark Canha, #20, with his hand on Maxwell’s shoulder.

The A’s released a statement in support of Maxwell’s decision:

This is likely just the tip of the iceberg, but it’s fascinating to see what finally brought baseball players into the fold.