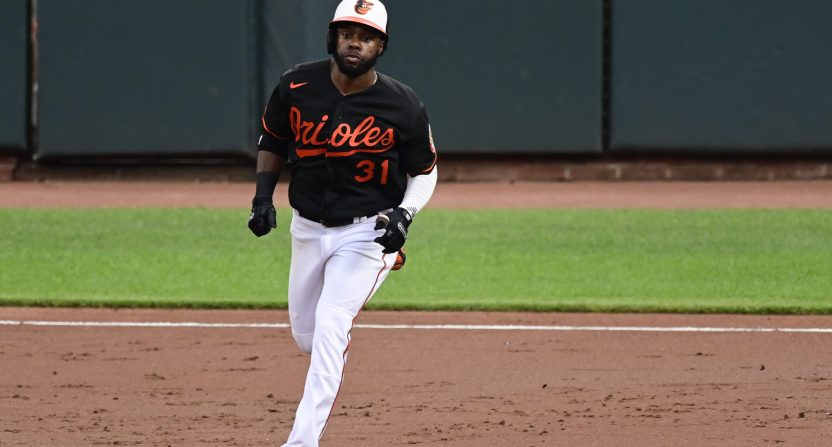 If you have no idea who Cedric Mullins is, don’t worry- you’re definitely not alone. Not many people outside of the Baltimore Orioles and diehard baseball fan circles knew much about him until the last few weeks either.

And we’re still learning about Mullins as a player in a sample that features only 718 career plate appearances (he’s in his third MLB season), but we’ve seen enough to suggest that he may very well be a star. Heck, so far this season, he’s playing at an MVP level.

He has his lowest strikeout rate this month and his highest walk rate.#Birdland pic.twitter.com/mMivuqhWU4

SIX homers for the @Orioles! pic.twitter.com/BaraANMaQO

That second home run vs the left-hander is particularly impressive, because Mullins was a switch-hitter before becoming a full-time lefty at the plate this season (he even entered the game with an .897 OPS this season vs lefties).

The list of players worth more wins above replacement (WAR) per FanGraphs at the moment:

That’s it. Mullins’ 3.6 WAR comes in at second and would be leading the NL.

The former 13th round pick (2015 draft) ranks fifth in MLB in batting average, eighth in on-base percentage, ninth in slugging percentage, eighth in OPS, seventh in stolen bases, second in hits (first in the AL)…. you name it, and he ranks high.

Additionally, he ranks first among center fielders in outs above average (OAA) with seven according to Statcast. So, he’s top-10 in all of the major offensive categories, and he’s playing fantastic defense at a premium position. Add all of that up, and it’s easy to see why he’s second in WAR.

The Orioles are having another miserable season with an AL-worst 23-47 record. But, it appears that they at least have a tremendous player to build around and a (badly needed) reason for the fanbase to be excited.