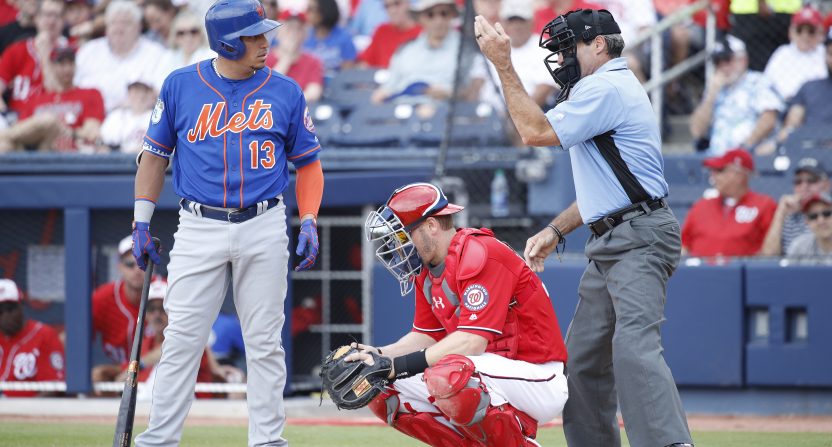 Baseball fans love to bicker about the rules. Whether instant replay or the designated hitter or pace of play or the dropped third strike, everyone has an opinion.

So we asked our staff, if you could change one rule in Major League Baseball, what would it be? Here are the answers:

Alex Putterman: I would shrink the strike zone, enforcing the bottom of the zone as the top of a batter’s knees, as the league proposed in February.

The reason for this is simple: The strikeout rate in Major League Baseball is too high. With pitchers throwing harder than ever and hitters looking to hit everything in the air, the average game features more strikeouts than ever before. Baseball is most exciting when the ball is in play—that’s how we get great defensive plays and exciting dashes around the base paths—and the modern game feature far too few balls in play.

This trend won’t reverse on its own. MLB needs to shrink the strike zone to force pitchers to throw strikes and allow batters to actually hit the ball.

Joe Lucia: The correct answer is a universal DH. It’s ridiculous that the two leagues have different rules, especially about such a crucial position. In no other major pro sports league do different divisions or conferences have separate rules—why in the hell does baseball?

Ryan Williamson: In my lifetime (just a short 22-plus years), I’ve never watched a player-coach in Major League Baseball. Yet, for some reason, we continue to make team coaching staffs wear uniforms with numbers. I think it’s silly when the manager has no chance of even playing in a game. I get it’s a tradition, but it seems unnecessary. Let the managers wear what they want. If it’s not a jersey, they gain points in my book.

Jay Rigdon: I wrote about this in more detail here, but I’d allow for a batter to refuse a walk if he wanted. Not just intentional walks; ball four would mean the hitter had the choice between staying in the box and taking first base, and it would continue as such. No more pitching around offensive threats. The game favors pitching and defense as it is, so why not give the offense some more strategy? Plus, it’d lead to fun debates about when it makes sense to decline a walk and instances of teams choosing the wrong side.

Ben Koo: This really doesn’t change the game much, but I’m compelled to air my grievance here. The home plate umpire should just make the call on check swings. It should not be allowed that the first or third base ump be asked to make a call there. You could say, this is a totally uniformed opinion but I’d say asking someone further away than most people can throw a football at a non-helpful viewing angle is even more uniformed.

The home plate umpire is like maybe four feet at most directly behind the hitter. He or she also has the best viewing angle of a swing where he’s right on top of the swing area and can see how far the bat went. Apparently “they’re watching the pitch” or some shit is the reasoning why he or she can’t also make a call on a check swing. That’s stupid. The swing is literally within inches of the pitch. It’s not like a random thing in your peripheral view that you barely see. It’s a dude swinging a huge piece of wood right where you are looking. I played catcher little league, and I could tell when a swing was a swing and I had the added responsibility of, you know, catching the ball, which is a hell of a lot harder to do than I imagine just chilling behind me and determining of something is a strike. The batter, the catcher, and the umpire all know what the deal is. Everyone else is guessing.

But noooooooo. Some genius once upon a time decided, “Hey, let’s ask this dude like 100 feet off to the side over there who probably isn’t paying full attention to determine what happened here.” That makes NO sense. Maybe they get the bulk of these calls right because the majority of these calls are somewhat easy to see, so fans, players, and announcers go, “Oh look! This system works!” but I’m not buying it. We’re trying to make a definitive ruling on the amount of degrees a bat swung through the zone.

Soccer, football, and hockey all have specific officials in place to call things like offsides and false starts chiefly because those people are closest to the call in question and have the right angle to make that call. Not baseball, though. And while I’ve never heard anyone else zealously agree with me on this, I’ll go to my grave thinking everyone is an idiot for not feeling the same way here. I’m glad I got this off my chest.

Matt Clapp: Ben made some great points, but the home plate umpire calling the check swing is my single biggest pet peeve in baseball. Hell, maybe in all of sports. I probably have five tweets about this each season. It drives me crazy because I think that the base umpire does have the better angle. Unless it’s at least like 80 percent clear, the home plate umpire should defer to the base umpire. It’s a total ego move in my opinion (which is something CB Bucknor, Angel Hernandez and Joe West love), and we frequently see the home plate umpire get the call wrong, which isn’t surprising because he has the more difficult angle! It’s all about getting the call right, even if it takes an extra five seconds to see what the dude down the line thinks.

Ideally, we just get the robot umpires calling balls and strikes already, and the base umpire will be forced to make the calls on check swings regardless. I dream of that day.

Ian Casselberry:  I’d implement a pitch clock. I know, baseball is the only sport without a clock and there’s a sense of romance about that. I agree with that for the most part. But we’re now more concerned about speeding up the game and moving the pace of play along. How about reducing the excess time during an at-bat when a pitcher is preparing to throw his next pitch and a batter steps out of the box, either to compose himself or try to throw the pitcher off his rhythm?

The rulebook already says the pitcher is supposed to throw the ball 12 seconds after getting the ball; it’s just never enforced. The pitch clock used in college baseball and the minors is 20 seconds. Eight more seconds to work with, and more drama potentially added to a ballgame. Veteran pitchers seem to be against it, set in their ways, which makes me want the clock even more. This is eventually going to happen in MLB.

Brandon Liebhaber: For me, it’s not so much a rule change as just enforcing an existing set of rules. I think the way MLB is going about attacking pace of play is totally wrong-headed. I’m far from a purist, but baseball should not have clocks. That is what makes it unique. Baseball does not need to limit the time between pitches with a clock.

Baseball already has rules in place to govern this stuff. Batters aren’t supposed to take two feet out of the box under most circumstances (they’re allowed to after foul balls, wild pitches, etc.). And pitchers aren’t supposed to unnecessarily delay the game by walking around the mound after pitches (among other things). These rules were on the books well before “Pace of Play” became a hot-button issue. Umpires have had the discretion to enforce these rules, but largely haven’t of late.

I agree that there are ways the sport could improve along the lines of the league’s current obsession with pace of play. But no-pitch intentional walks and pitch clocks (currently being used in the high minors) don’t really solve the problem. Just enforcing rules that have been on the books would go a long way.

Liam McGuire: It’s easy: robot umpires. Far too often, bad calls are made that cost teams big time. If we have the ability to correct it, why not? You can still keep an ump around to make decisions when need be, but let’s end horrible strike calls. It ruins baseball. Nobody likes it—well, maybe umpires do.