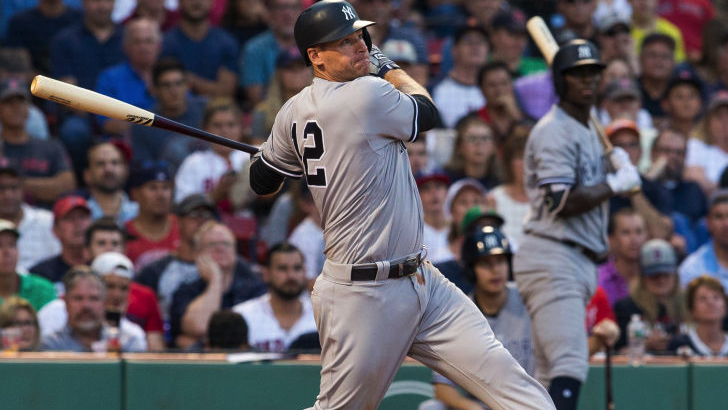 Can the Yankees (80-66) be a 90+ win team again for the first time since 2012? The Bronx Bombers have won nine of their last 13 games. Midway through September, baseball’s final month of the regular season, the Yankees are tapping into a rhythm that thrives on the bottom of the lineup.

It should come as no surprise that the team’s most home runs (36) come from the No. 3 hole, occupied most frequently by none other than Aaron Judge and Gary Sanchez. The second-most homers (29) are produced by the No. 5 hole (a combination of Starlin Castro, Todd Frazier, Didi Gregarious and sometimes, Judge). But the third most jacks (28) emanate from the No. 7 hole. That’s 13 percent of all Yankees’ homers, relentlessly putting pressure on opposing pitchers from the bottom of the lineup.

Without mentioning the obvious production from Judge and Sanchez, the Yankees’ lineup is jam-packed with talent. We could witness a scenario in which a veteran like Matt Holiday is benched for a hitter on a massive hot streak, like Chase Headley.

Which leads us to my next question: is Headley the Yankees’ X-factor? His current 12-game hit streak sheds light on the adjustments he’s made since the All-Star break.

Take one of Headley’s crucial at-bats against the Rays on Sept. 13, for example.

The Yankees are holding onto a 3-2 lead in the ninth inning. Brett Gardner’s jets are on first. Headley’s determination at the plate. Looking to add insurance runs, Gardner speeds to second as Headley takes an enormous delayed swing. He hits the Rays’ catcher with his bat, pulling a blatant catcher’s interference. Instead of arguing, Headley snarls at a pitch then slices a liner for a single in the next, defiantly placing the scoring run on third instead of second. It’s the type of sneaky grit that makes a difference in the playoffs. He battles at the plate, similar to Gardner’s bullish school of thought.

Headley is slashing .333/.353/.542 with three home runs, eight RBIs and an .895 OPS during his current 12-game hit streak. But his success dates back to mid-summer, when the focus was on Judge’s bizarre Home Run Derby. Since July 14, Headley is batting .316 with eight home runs and an .883 OPS. He owns the Yankees’ best second-half batting average, and it’s not even close. No other hitter is batting over .300 since the All-Star break.

His consistency at the plate gives the bottom of the Yankees’ lineup a spark and, most importantly, depth. Match his hot streak with Jacoby Ellsbury’s veteran at-bats and the utility phenom that is Ronald Torreyes, and the Yankees have a dynamic, yet threatening lineup heading into October.