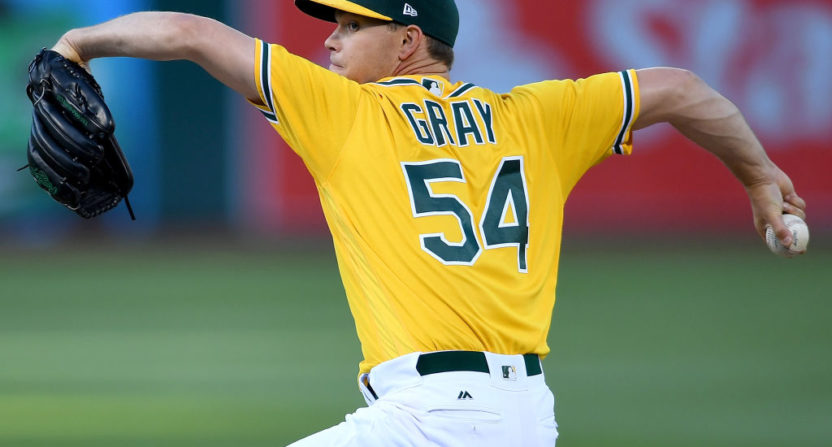 Monday was the busiest, wildest day on the Major League Baseball calendar: the Trade Deadline. And although this year’s deadline was not the craziest we’ve ever seen, it provided a fair amount of action, including two major trades involving marquee teams and big-name players.

We’ll fill you in on how Sonny Gray became a Yankee, how Yu Darvish became a Dodger and other notable deadline deals, while also getting you caught up on the rest of Monday’s sports news. Welcome to The Cheat Sheet.

Gray was the most valuable player on the market not only for his performance (3.43 ERA, 3.24 FIP this season) but also for his age and contract status. The Yankees will control the one-time All-Star through 2019, giving them an affordable top-of-the-rotation arm for the next two and a half seasons.

Sonny Gray gets his pinstripes pic.twitter.com/Wv8e3V716p

Not only did the Yankees get their man, but they also got him without giving up a front-line prospect like Clint Frazier. In fact, none of the three players the Yankees dealt away seemed essential to their long-term plans. Mateo is blocked at shortstop and in the outfield, while Fowler and Kaprielian are both on the shelf with serious injuries. The Athletics can likely use all three prospects, but the Yankees won’t miss any of them too much.

Meanwhile, the upgrade to New York’s Major-League roster is substantial, with Gray likely replacing solid but unspectacular rookie Jordan Montgomery on the starting staff. If the Yankees reach the playoffs, a rotation of Gray, Luis Severino, Masahiro Tanaka and CC Sabathia could be as tough as any they would face in the American League. Only a year after launching somewhat of a rebuild, the Yankees now have a roster with few flaws and lots of young talent. They could very well beat out the Red Sox in the AL East this season and appear well-positioned for the near future as well.

As the Trade Deadline passed, it looked like Darvish would be sticking in Texas. With no reported deal in place, the Rangers had apparently decided to keep their star righty and make a far-fetched run at the playoffs before he hit free agency at the end of the season.

Then, 12 minutes after the deadline, came a dramatic tweet from Fox Sports’ Ken Rosenthal.

And just like that, Yu was a Dodger, shipped west in exchange for second base prospect Willie Calhoun and two other minor leaguers.

Darvish to L.A. is a great example of the rich getting richer. The Dodgers are a remarkable 74-31 on the season, on pace for 114 wins, and now they’ve added an All-Star with a 3.42 career ERA who has struck out more than a batter an inning in each of his Major-League seasons. And they somehow did so without sacrificing any of their top three prospects.

With Clayton Kershaw injured, Darvish will be the Dodgers’ top starter for the next six weeks or so, and when the three-time Cy Young winner returns, Darvish will be one of baseball’s top No. 2 starters. The Dodgers were already the very best team in baseball. Now they’re even better.

Other Trade Deadline deals worth noting

– The Astros picked up struggling veteran Francisco Liriano to strengthen their bullpen, while sending Nori Aoki and a prospect to Toronto.

– The Rays dealt shortstop Tim Beckham to the Orioles, apparently as much for off-field reasons as for on-field reasons.

– A lot of solid relievers wound up on new teams. The Red Sox got Addison Reed, the Nationals picked up Brandon Kintzler, the Indians grabbed Joe Smith, the Diamondbacks snatched David Hernandez, and the Dodgers acquired Tony Watson (and Tony Cingrani).

You can read The Comeback’s analysis of all those trades and more right here.

Jose Fernandez's 5-month old daughter Penelope reaches out for photo of him. This breaks my heart ⚾️?❤ pic.twitter.com/LvM7yiTvQF

– Baseball’s top prospect, Yoan Moncada, was involved in a scary collision with a teammate during the White Sox’s game against the Blue Jays. He is considered “day to day” with a mild knee injury.

– Los Angeles is getting the 2028 Olympics. Did anyone ask for that? We’re not sure.

– Houston Rockets general manager Daryl Morey thinks it might make sense to eliminate individual awards. How do you feel about that, Blake Griffin?

honestly, we should do away with championships too. seems dumb to me. participation trophies for everybody. don't @ me https://t.co/Hdnow9GoQO

– HBO was hacked, which means Game of Thrones scripts could soon hit the internet. That’s no fun for anybody.

Check out Marshawn Lynch swearing on live television, asking out an anchor, realizing she’s married, announcing he will not be dating her and generally conducting one the most bizarre television appearances of all-time.

Raiders RB Marshawn Lynch was on the NFL channel, and the interview was entertaining to say the least. Check this out. pic.twitter.com/RhIx5z7yQC