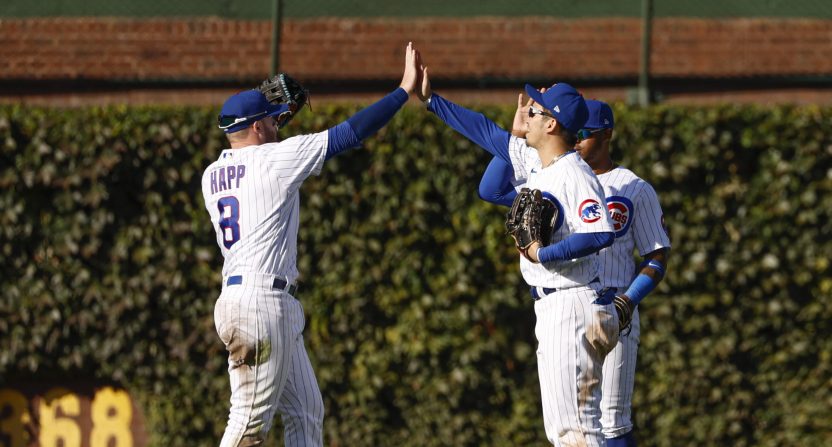 The Chicago Cubs are 70-86 heading into the final stretch of the 2022 MLB season. However, had they played in the NL East, they might be the most dominant team in all of baseball.

While they struggled early in the season, the Cubs have dominated the teams they’ve played from the NL East, going 21-10 against the Atlanta Braves, New York Mets, Washington Nationals, Miami Marlins, and Philadelphia Phillies. Considering two of those teams, the Braves and Mets, have over 90 wins and are both playoff squads, while the Phillies are in playoff contention as well, it’s pretty baffling.

The Cubs finished 21-10 against the NL East, their highest winning percentage (.677) against the division in franchise history.

They completed their weird dominance with a 2-0 victory over the Phillies on Thursday.

Naturally, the wild statistic has a lot of folks around the MLB world reacting.

So my takeaway is that the Cubs win the NL East

The Cubs went 21-10 against the NL East this year, 13-6 against the top three teams. I’m sure everyone expected that.

It’s also the first time that the Cubs swept the season series from the Phillies, which is saying something since they’ve both existed since the 19th century.

With today's win, the Cubs finish 6-0 vs. the Phillies this year.

Perhaps even crazier is that the Cubs had more wins over teams over .500 than every MLB team except the Mets.

Wanna have your socks blown off?

Just ONE team in the National League (the Mets, 41) has more wins this season against teams with a record above .500 than the Cubs (33).

It certainly makes you wonder what went wrong for Chicago this season that they weren’t able to capitalize on this. If nothing else, petitioning a move to the NL East should be the first step to figuring it all out.