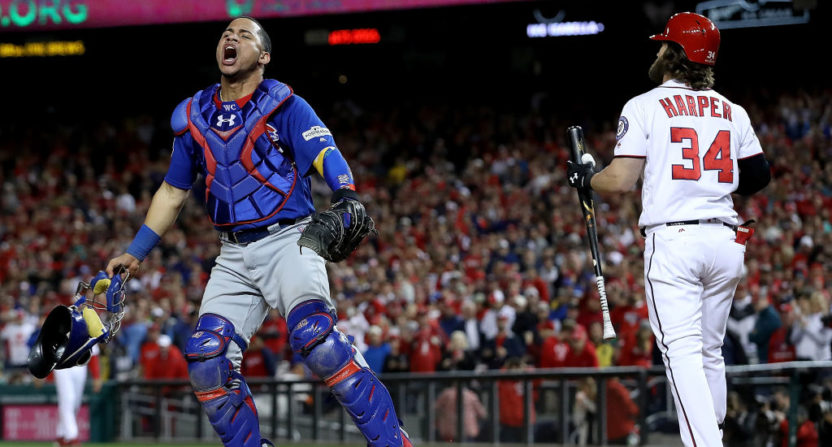 Game 5 of the National League Division Series lasted nearly five hours. It featured 23 hits, 17 runs, 14 pitchers several comebacks, a run-scoring wild pitch, a passed-ball third strike that resulted in a catcher being whacked in the head, a catcher’s interference, a run-scoring hit-by-pitch, an ace self-destructing, an outfielder missing a line drive, a closer stretching himself as he never had before, a base runner getting picked off on a controversial replay review.

And in the end, it featured the Chicago Cubs gathered on the Nationals Park mound in celebration of their epic 9-8 defeat of Washington, which earned them a place alongside the Dodgers in the NLCS.

The hero for the Cubs was… well, it was the Nationals, who committed two errors and several other key misplays in the field, granting Chicago runs throughout the evening. The coup de grace of Washington mishaps came in the bottom of the eighth inning, when Jose Lobaton, representing the go-ahead run, wandered too far off first base, drew a throw from Willson Contreras and got himself picked off (with help from a highly legalistic review).

To the extent the Cubs had a hero of their own, it was closer Wade Davis, who entered in the seventh inning and recorded seven outs on a season-high 44 pitches. With a 3-2 count and two outs in the ninth inning, he extinguished the Nationals’ hopes by whiffing Bryce Harper on a low-and-in slider that sent his teammates into a frenzy.

Watch the final out from the @Cubs' Game 5 NLDS win over the Nationals. pic.twitter.com/v1cuXDp2xv

Hours before Davis struck out Harper to end the game, the game was started by Gio Gonzalez and Kyle Hendricks. After the Cubs grabbed a 1-0 lead in the first inning, the Nationals scored four in the second, on a solo home run by Daniel Murphy and a three-run shot from Michael A. Taylor. The Cubs then tagged Gonzalez for two runs in the third, knocking the Washington lefty from the game.

After Matt Albers shut down the Cubs in the fourth, the path to Nationals victory looked clear. Max Scherzer, pitching out of the bullpen on short rest, would pitch two innings before ceding to a tough back of the Washington bullpen. But with two outs in the fifth, Scherzer allowed an infield single, then a bloop, then a hard-hit two-run double that put the Cubs back ahead. Following an intentional walk to Jason Heyward, Scherzer appeared to escape on a strikeout of Javy Baez, but the pitch slipped to the backstop, permitting Baez to take first base, Addison Russell to score and the inning to continue. Replay showed that catcher Matt Wieters had been hit by Baez’s back swing, which should have resulted in an out, but umpires did not catch the contact. The inning got somehow weirder when Tommy La Stella reached on a catcher’s interference and Jon Jay brought home a run by being hit by a pitch.

.@Addison_Russell turned that clutch factor all the way up. #NLDS pic.twitter.com/Nj2iQp6VQI

The Cubs got their eighth run in the sixth inning when a Russell line drive slipped right past the glove of a sliding Jayson Werth for an RBI “double.” After the Nationals rallied for two scores in their half of the frame, the Cubs tacked on an insurance tally in the seventh on a Kris Bryant fielder’s choice. Of Chicago’s nine runs on the night, only two were scored on hits.

The Nationals kept chipping away at the Cubs lead, with a run apiece in the seventh and eighth innings but went down timidly in the ninth. The loss is nothing short of devastating for the franchise and its fans, who have watched the Nats reached the playoffs four times in the past six seasons while failing to win a single postseason series.

For the Cubs, the win marks a third straight berth in the NLCS and a second straight matchup with the Dodgers. Having used all four of their playoff starters over the past two games, they set up awkwardly to face Clayton Kershaw and L.A., but that’s a concern for after the champagne dries. Having won one of the longest and tensest games on record, the Cubs deserve a night to celebrate.