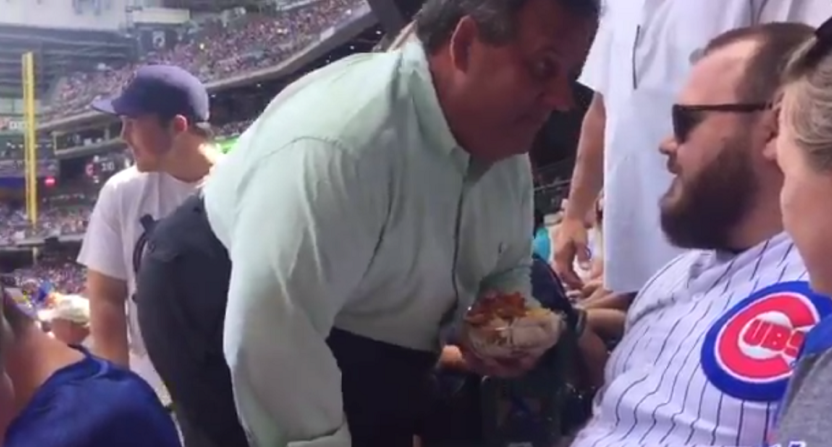 Chris Christie is, at this point in his political career, a buffoon. A ridiculous but amusing person. A clown. No one in New Jersey respects the lame duck governor at all, which means he’s apparently free to take his particular carnival act on the road, including a stop at Miller Park for today’s Cubs-Brewers clash.

He’s been attending quite a few baseball games of late, including making a decent snag of a foul ball (off the bounce, but still) at a Mets game, which resulted in Christie being roundly booed by the majority of the stadium. Today, that heckling carried over, but Christie was emboldened by the fact that he was in away from home, and decided to get in the face of a Cubs fan who was presumably one of the hecklers.

At #Cubs #Brewers game. #ChrisChristie was getting razzed by fans, so he got in the face of one of them. 5:30 on @WISN12News pic.twitter.com/sx8euMgFy2

That’s a heck of an insult coming from Chris Christie. Bonus points for Victor Caratini homering in the background of the video, en route to a 4-2 Cubs win that put them 1.5 games (and 3 games in the loss column) ahead of the Brewers.

Chris Christie, at this point, just go ahead and untuck your shirt.

“Pedro Strop can wear his hat however he wants, you hear me?” pic.twitter.com/ukcC35PLux

Rule Number 1 – Don't talk shit to Chris Christie when he hasn't had a single one of his nachos yet pic.twitter.com/MjK7j6UpF7

WISN has some more details, including an interview with the Cubs fan in question:

“When he initially was going up the stairs I yelled his name. He was quite a bit passed me, and 30 feet away I yelled his name and told him that he sucked. … I called him a hypocrite because I thought it needed to be said. He turned around back towards me and got in my face for what seemed like a long time, but was probably only about 30 seconds or a minute. (He) was yelling at me. First he told me, ‘Why don’t you have another beer?’ which I thought was a decent come back, and I thought that was kind of funny. Then he started calling me a tough guy.”

Hutchison began recording video at the end of the confrontation.

Chris Christie should be more careful; thin skin is dangerous for someone of his girth.