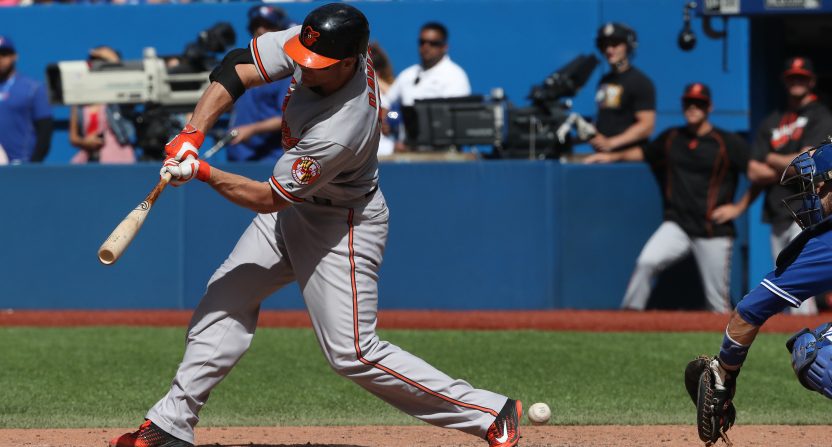 It’s been an exceptionally rough year for the Baltimore Orioles, who were 46-112 heading into Friday night’s game against the Houston Astros, and it’s been a particularly rough season for 32-year-old first baseman/DH Chris Davis. Orioles’ manager Buck Showalter indicated Friday that Davis is unlikely to play in any of their final four games, which would end his season with appearances in 128 games (116 at first, 12 at DH) and just 79 hits (plus 192 strikeouts) in 470 at-bats, giving him a batting line of .168/.243/.296. That’s historically bad:

He was significantly under the previous record, too:

While Davis’ WAR is dismal, it’s maybe not the worst ever; Fangraphs gives that honor to Jim Levey’s -4.0 in 1933. But it appears to be the worst since 2000, and his 45 wRC+ is the third-worst in that span. And that led to plenty of commentary on Davis’ season and how much the Orioles still owe him:

Chris Davis' season was so awful that it might've been the worst single season by any player in the 21st century.
Or was it Adam Dunn, who managed to accumulate -2.9 fWAR in <500 PA (not even a qualified season!)? pic.twitter.com/XRLmEsaYJr

The American League average OPS this season is .734.

If Chris Davis played in each of the Orioles’ last four games, going 5-for-5 with 5 home runs in each, his OPS at the conclusion of the season would be .718.

Sports Illustrated‘s Stephanie Apstein wrote a big feature on Davis and his struggles earlier this week, which included lines like “I have no clue what I’m doing at the plate” and touched on how absolutely nothing was working for him this year. But that piece also included that Davis’ mark here is thanks to his desire to keep trying, as Showalter offered to sit him earlier so he wouldn’t qualify for the batting title:

Showalter took a look at the numbers in early August and extended a courtesy to his sometimes slugger: He offered to sit Davis in September so he wouldn’t amass enough at bats to pass Levey’s mark. “Let me be the bad guy,” the skipper said.

“I’m not scared of these numbers,” Davis answered. “I’m going to continue to stay with my plan, stay with my approach. It may look like crap, but I’m not going to run from this.”

And to his credit, he didn’t. And maybe he’ll figure out what’s wrong in the offseason, or maybe he’s just fallen off the aging cliff completely at age 32. Either way, he’s in the third year of a seven-year, $161 million contract, the highest ever for the Orioles and the 22nd-highest over. So they’ll be paying him for a while.