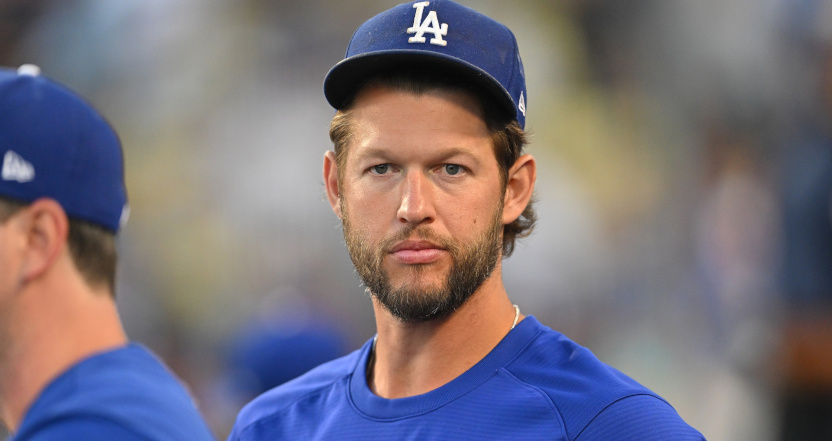 On Thursday night, Los Angeles Dodgers‘ pitcher Clayton Kershaw left their game against the San Francisco Giants during his warm-up pitches in the fifth inning. After the game, the Dodgers said he left due to low back pain, but there wasn’t any information on the prognosis. And Kershaw himself said it was “hard to tell” how severe the injury was, and said he would know more when he woke up Friday.

Well, Friday afternoon saw the Dodgers officially announce that Kershaw had been placed on the 15-game injured list, and that outfielder/utility man Chris Taylor had been returned to the active roster from the injured list, with the team also recalling reliever Reyes Moronta from Triple-A Oklahoma City and optioning outfielder James Outman.

Kershaw lands on the IL for the second time this season. He lost around a month between early May and June with inflammation in his right hip area. The future Hall of Famer returned and went on to make ten more starts before yesterday’s outing. After throwing four innings of two-run ball in an eventual win over the Giants, Kershaw went out to the mound for his warm-up tosses to start the fifth. He pulled himself from the game after experiencing some pain in his lower back, and that issue will apparently keep him out of action for at least the next few weeks.

The team hasn’t provided a timetable on Kershaw’s return, and the announced diagnosis of “low back pain” remains nebulous. They’ll surely be cautious with the 34-year-old, particularly since he’s landed on the injured list at least once in each season since 2016. That included stints for back issues every year between 2016-18. With a 12 1/2 game lead over the Padres in the NL West, the Dodgers can feel comfortable playing things slowly with key players for the final couple months.

Kershaw (seen above in July) has posted a 2.64 ERA and 88 strikeouts to 15 walks across 85 and one-third innings this year.