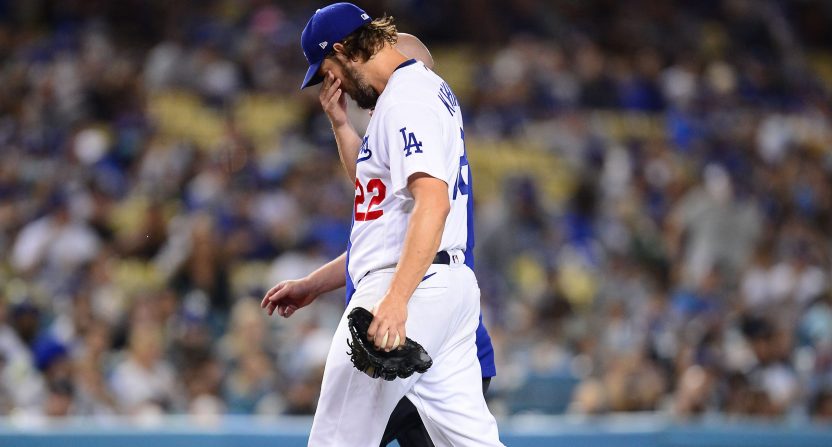 The Los Angeles Dodgers (103-56) entered play on Friday night two games behind the San Francisco Giants for the NL West crown with three games remaining for each squad. The Dodgers are at least assured of the top NL Wild Card slot and the right to play for an NLDS berth even if they fall short with the division title hopes. Even with the uncertainty of their postseason positioning, the Dodgers still have the highest World Series title odds (19.9%), according to FanGraphs.

However, a key member of their pitching staff left with an apparent injury on Friday night against the Milwaukee Brewers.

Three-time Cy Young Award winner Clayton Kershaw left his start with two outs in the top of the second inning after allowing an RBI double to Milwaukee’s Kolten Wong. It was the third run and fourth hit that Kershaw allowed in the inning. Overall, he threw 42 pitches.

Clayton Kershaw walked off the mound with the baseball in his hand. Did not give it to MGR Dave Roberts. There is a chance this could be Kershaw's last start for #Dodgers. He will be free agent this winter. https://t.co/2AalwPPodU

Kershaw, 33, has a 3.55 ERA and 2.99 FIP in 121 2/3 innings pitched this season. The left-hander missed more than two months (before returning on Sept. 13) due to a forearm injury, and he hasn’t gone more than five innings in any of his four starts since returning.

The good news for the Dodgers is that their starting rotation depth is loaded, especially after trading for Max Scherzer (who the Dodgers just announced will go in the Wild Card Game or NL West tiebreaker game). They’ve even had highly capable starters Tony Gonsolin and David Price in the bullpen for much of the season due to the depth, and only four starters are typically needed to get by in the postseason.

Kershaw is in the final year of a three-year, $93 million contract with Los Angeles, so it’s *possible* he just threw his last pitch with the Dodgers. It’s also possible that he’s fine and will be a key part of their rotation in October. We’ll keep you updated on the reason for his exit.

Update: The Dodgers announced that it’s left forearm discomfort, the same injury that forced Kershaw to miss more than two months this season. Not good news for Kershaw and the Dodgers.

#Dodgers announce that Clayton Kershaw left the game because of left-forearm discomfort, the same kind of injury that sidelined him for almost 2 1/2 months this summer.

Update II: The Dodgers have officially played Kershaw on the injured list with left forearm discomfort.