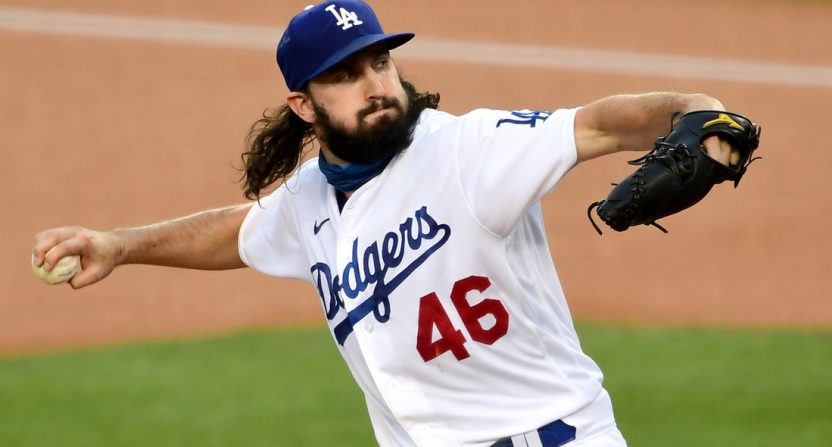 After losing Game 1 of the NLCS to the Atlanta Braves, 5-1, the Los Angeles Dodgers looked to rebound quickly behind ace starting pitcher Clayton Kershaw in Game 2 to even the series.

But if the Dodgers win Game 2, they’ll have to do so without Kershaw. The star left-hander has been scratched from Tuesday’s game with back spasms, according to reports.

Starting in Kershaw’s place will be rookie Tony Gonsolin, making his first appearance of the postseason for Los Angeles.

Gonsolin, 26, had a strong regular season, compiling a 2-2 record and 2.31 ERA in eight starts (nine appearances overall). The right-hander struck out 46 batters with only seven walks in 46 2/3 innings, establishing himself as the Dodgers’ third or fourth starter along with Dustin May.

Had Kershaw not gotten hurt and the Dodgers’ rotation worked as planned, Gonsolin would likely have been tapped to start Game 3. May pitched in Game 1 Monday, throwing 1 2/3 scoreless innings of relief. But now he gets the emergency Game 2 nod.

With Kershaw’s history of back injuries, including stiffness that necessitated a stint on the injured list to begin the 2020 season, the question will be how serious the spasms are and whether or not he’s available for Game 3.

Curious to hear the severity of Kershaw's condition — if this is a one-day skip, and he can go in Game 3, or if the Dodgers will have to scramble.

Max Scherzer got scratched for Game 5 in last year's World Series and made it back for Game 7 . . . but that was with off days.

Kershaw has been the Dodgers’ most reliable starting pitcher thus far in the 2020 postseason, throwing 14 total innings in his two starts with 19 strikeouts and one walk. He was outstanding in the Wild Card opening round versus the Milwaukee Brewers, allowing three hits in eight scoreless innings.

But Kershaw’s poor postseason performances have stained his otherwise sterling career. And his NLDS start against the Padres looked as if it could follow a similar narrative.

In the sixth inning, Manny Machado and Eric Hosmer hit consecutive home runs off Kershaw, cutting the Dodgers’ lead to 4-3. It felt eerily similar to the back-to-back homers he allowed to the Nationals’ Anthony Rendon and Juan Soto in Game 5 of the 2019 NLDS.

However, the Dodgers have more immediate concerns. Falling behind 0-2 in the NLCS wouldn’t be fatal, but Los Angeles would certainly face an uphill climb in that scenario.

While Dodgers fans lamented the failure of the bullpen — viewed as the team’s glaring weakness with the decline of closer Kenley Jansen — the Braves’ pitching continued shutting down opposing lineups, holding an imposing lineup featuring Mookie Betts, Cody Bellinger, Corey Seager, and Justin Turner to one run.

Scoring more runs would certainly take the burden off Dodgers pitching, regardless of who starts and who proves reliable in relief.