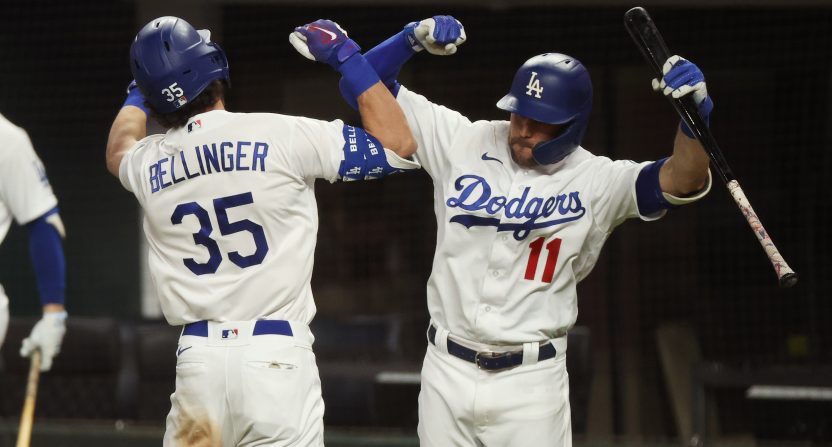 Cody Bellinger crushed a solo home run in the Los Angeles Dodgers’ win over the Atlanta Braves in Game 7 of the NLCS. The massive dinger served as the series-winner, breaking a 3-3 tie in a 4-3 Dodgers victory. Without the home run, it’s very possible that the Dodgers don’t win the World Series- or even reach the World Series.

However, when celebrating the blast, Bellinger dislocated his right shoulder.

Cody Bellinger gives the Dodgers the lead in the 7th – and he knew it 💥 pic.twitter.com/sR4NW6lMky

Dodgers may want to dial it back on those elbow bumps. Cody Bellinger apparently popped his shoulder on this one after his home run 😳 pic.twitter.com/BeUanUUALF

Bellinger played through the pain in the World Series, but it surely impacted his performance, as his slash line would suggest: .136/.208/.273.

Bellinger is expected to miss 10 weeks, which would put him on track to return by spring training.

Bellinger probably has no regrets for celebrating a crucial home run in his team’s championship run, even though he suffered an injury that will sideline him for two-plus months.

And expect the Dodgers to be very cautious with Bellinger’s rehab timeline. He should be good to go by spring training, but there’s no reason to rush anything ahead of what is hopefully a 162-game season this time around. The Dodgers are absolutely loaded and will enter 2021 as clear NL favorites, regardless of whatever moves are made by other contenders this offseason.