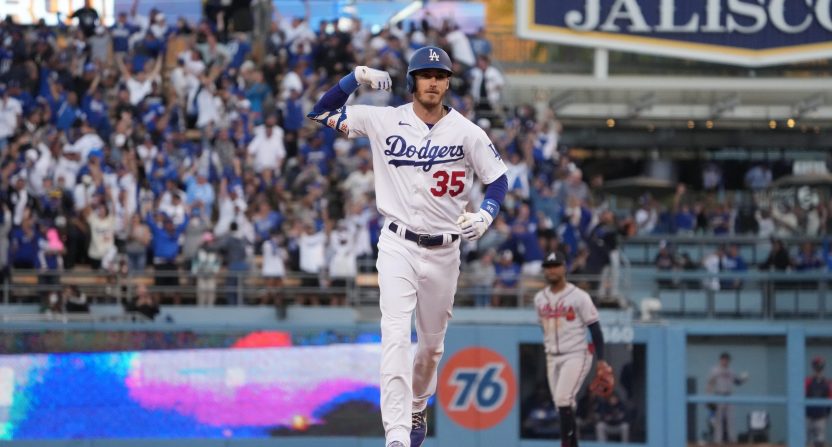 The Atlanta Braves were oh so close to taking a fully commanding 3-0 series lead in the National League Championship Series on Tuesday. But the Los Angeles Dodgers rallied with four runs in the eighth inning to come away with a 6-5 win in Game 3, trimming the Braves’ series lead to 2-1.

The Dodgers trailed 5-2 with one out in the bottom of the eighth, when Cody Bellinger stepped to the plate. After being a superstar just two years ago, Bellinger was brutal for the Dodgers in the 2021 regular season, putting together a .165/.240/.302 slash line. But he stepped up with the Dodgers’ season potentially on the line, crushing a three-run homer on a high fastball from Atlanta reliever Luke Jackson to tie the game.

Cody Bellinger crushes a 3-run homer to tie it in the 8th! ⚾️💣 pic.twitter.com/1Mw4AUohs8

Later in the inning, Mookie Betts showed why he’s worth the very big bucks by smoking a go-ahead RBI double.

Mookie Betts with an RBI double to give the Dodgers a 6-5 lead! ⚾️ pic.twitter.com/GpKYSArbO7

And in the top of the ninth, Dodgers closer Kenley Jansen struck out the side to give Los Angeles a 6-5 victory.

Kenley Jansen strikes out the side to give the Dodgers a 6-5 win over the Braves in Game 3! 🔥

So, the Dodgers were able to make it a 2-1 series instead of being down 3-0, and it sure felt like the momentum of the series in general took a big swing — just like Bellinger and Betts did — in the eighth inning.

The Dodgers entered this series as heavy favorites, both to win the NLCS and the World Series title. But asking them to win four straight games with a 3-0 deficit would’ve obviously been an extremely difficult task. Now, they’re right back in the series. Five Thirty Eight has the NLCS series odds at exactly 50-50 now, and the computers aren’t even factoring in the “feel” and human side of everything that happened.

For all intents and purposes, it was a season-saving eighth inning for the Dodgers, and a huge opportunity blown for the Braves.

But, the great thing about baseball is that — until elimination — you quickly get a chance to change the story. Game 4 is on Wednesday in Los Angeles, and the Braves will look to take back control of the series.