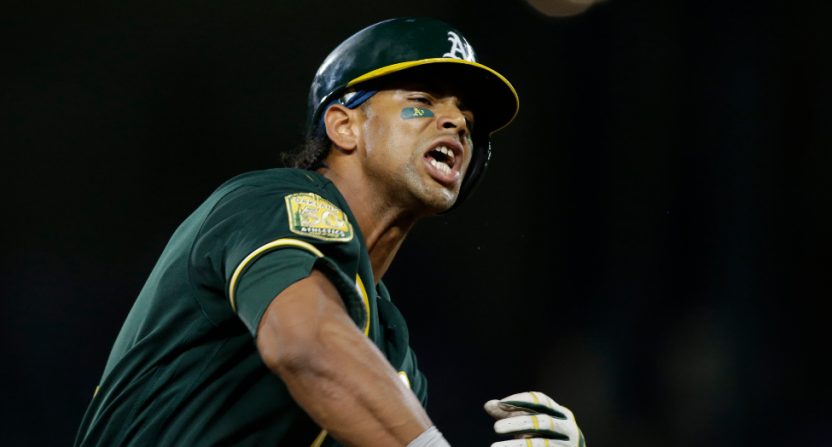 Yogi Berra’s famous “It ain’t over until it’s over” quote is particularly applicable to the 2018 Oakland A’s. Heading into Tuesday night’s road game against the Texas Rangers, 14 of the A’s last 23 wins had involved a comeback. And that trend continued in Oakland’s 10-inning win Tuesday, which was particularly impressive for the deficit it overcame. The A’s had never previously won a game in their since-1968 history in Oakland when trailing by eight or more after six innings, but they trailed 10-2 heading into the seventh Tuesday night, and came back to win 13-10, boosted by a three-run home run in the top of the 10th from designated hitter Khris Davis:

This was a remarkable comeback for the A’s, and the first time the franchise had overcome a eight-run deficit that late since August 30, 1939, back when they were still the Philadelphia Athletics. And it started in the seventh, when back-to-back doubles from shortstop Marcus Semien and pinch-hitter Nick Martini scored three runs, cutting the lead to five. Oakland then added four more runs in the eighth thanks to Texas shortstop Elvis Andrus’ mistake on a Semien ground ball that could have been an inning-ending double play. That scored one run, and Martini was then hit by a pitch, scoring a second run; second baseman Jed Lowrie then hit a two-run single off Rangers’ closer Keone Kela to pull the A’s within one, and Stephen Piscotty then provided the game-tying solo shot in the ninth before Davis’ three-run jack in the 10th.

This is just part of what’s been an impressive recent run from the A’s. Few had them as serious postseason contenders this year, especially given that they finished last in the AL West last year with a 75-87 mark and were in a AL West division featuring the reigning World Series champion Houston Astros and a pair of teams much lauded for their offseason moves, the Los Angeles Angels and Seattle Mariners. And the A’s started this season 5-10 and were only 14-14 after April, 29-28 after May and 34-36 as of June 14. But since June 16, they’ve gone a MLB-best 25-7 to improve to 59-43, and they’re now just a game and a half back of the Mariners (who lost 4-3 to the San Francisco Giants Tuesday) for the AL’s second wild-card slot. There are plenty of games this year where one side can be counted out, as seen by the record numbers of position players pitching in blowouts, but it’s tough to ever count out these A’s.