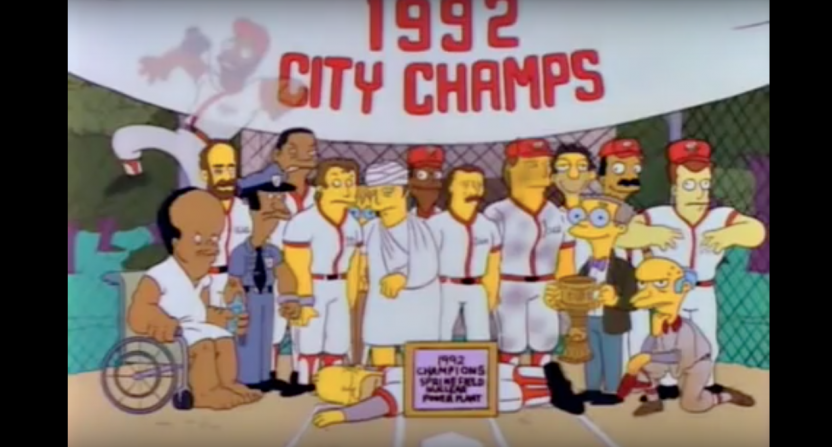 One of the greatest episodes of The Simpsons premiered 25 years ago this past Monday. The season four episode Homer at the Bat, where MLB players got bogus jobs at Mr. Burns’ nuclear power plant in order to win their softball league, was a classic and now has its place in Cooperstown.

The National Baseball Hall of Fame will open an exhibit for the episode as well as having an unofficial induction ceremony for Homer. A roundtable discussion will also take place on May 27 featuring executive producers Al Jean and Mike Reiss, director Jim Reardon, executive story editor Jeff Martin, casting director Bonnie Pietila as well as Hall of Famers Wade Boggs and Ozzie Smith.

The episode revolves around the guys at the nuclear power plant playing in the plant softball league. After the team struggled, Homer brought in his secret bat called “Wonderbat” (an homage to The Natural) and the team started playing well. But after Mr. Burns made a bet with the Shelbyville plant, he decided to bring in Boggs, Smith, Darryl Strawberry, Roger Clemens, Ken Griffey Jr., Steve Sax, Don Mattingly, Mike Scoscia and Jose Canseco to fill out the starting lineup and try to win the championship.

There are some classic scenes within this episode that Simpsons fanatics still bring up. There’s the “Darryl, Darryl” chant that Bart and Lisa made after Darryl Strawberry sent Homer to the bench.

And then there’s Mr. Burns and his insatiable need for Don Mattingly to shave his sideburns (obvious George Steinbrenner joke) and kicked him off the team after Mattingly shaved the sides of his hair. Despite that, Mattingly “still liked him better than Steinbrenner.”

Talking about being a part of the Baseball Hall of Fame, executive producer Al Jean said, “When I struck out in tee-ball, I never dreamed I’d make it to the Hall of Fame. It shows what not following your dreams can do.”

It also goes to show what can happen when one takes the road less traveled to get to places they never expected to be.