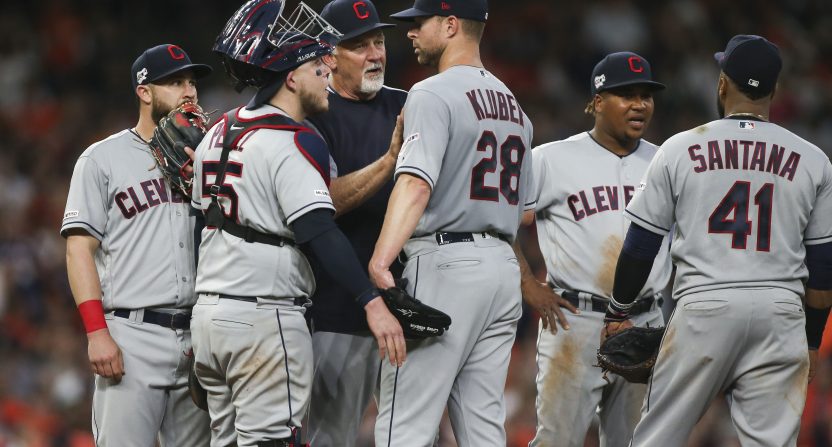 Two-time Cy Young winner Corey Kluber was drilled by a comebacker during the fifth inning of the Indians-Marlins game on Wednesday night. The 102-mph line drive hit Kluber in the pitching arm, and he left the game with what was initially diagnosed as a contusion in his right forearm.

Here's the play of Corey Kluber getting hit in the arm by a line drive. Kluber has left the game and we will pass along any updates. pic.twitter.com/WE55U3p9sU

However, Kluber later had x-rays, which revealed a non-displaced fracture on of his right ulna bone.

Initial X-rays on Corey Kluber revealed a non-displaced fracture of his right ulna.

Corey will be reevaluated tomorrow in Cleveland to confirm and assess timetable. pic.twitter.com/14FpTv84Y2

As the Indians’ Twitter account says, Kluber will be reevaluated for a clearer timetable. But it’s hard to imagine him being back anytime soon when we’re talking a fracture on his pitching arm. Even once that’s *healed*, the Indians will likely be careful with his throwing program and rehab. It would seem likely that he’s out for at least several weeks, and probably through at least June.

This is obviously a huge blow to the Indians, especially with starting pitcher Mike Clevinger (3.02 ERA in 200 IP in 2018) already on the 60-day disabled list with a back injury.

Yes, Kluber was off to a rough start in 2019 (a 5.89 ERA in 35 IP), and he’s 33 years old with the possibility of a decline coming anytime now. But he’s coming off his fifth straight 5+ WAR season according to FanGraphs (fWAR), which included a 2.89 ERA and 3.12 FIP in 215 innings pitched. Odds are he’s still very good to great, with ZiPS projecting him for 4.0 WAR the rest of the season (though that won’t be the case after this injury, of course).

There’s also the underrated value in Kluber’s ability to eat innings. He’s thrown at least 200 innings in all of the past five seasons, serving as an outstanding workhorse in addition to the tremendous performance. So, not only is Kluber as good as they’ve come in the AL in recent years at run prevention, but he’s also given his team a ton of innings and helped keep the Cleveland bullpen fresh.

Without Kluber and Clevinger, it’s going to be quite a test for the Indians’ rotation depth. It’s also putting more pressure on Trevor Bauer and Carlos Carrasco to perform like frontline starters and get deep into games.

And then there are the Minnesota Twins.

Entering the season, it seemed it wasn’t a matter of if the Indians would win their fourth straight AL Central title, but by how many games (Cleveland won the division by 13 games in 2018, for example).

But the Twins are off to a roaring start, with an AL-best 18-10 (.643) record, 2.5 games better than the Indians. This appears to be a well-rounded Minnesota squad that ranks first in the majors in slugging percentage (.493) on the offensive side, and sixth in pitching fWAR. FanGraphs currently projects the Twins for 90 wins and the Indians for 93 wins, and that’s not factoring in Kluber’s injury yet.

Just a few weeks ago, it would’ve seemed insane to view the AL Central race as a near coin flip between the Indians and Twins, but that appears to be where we’re at right now. And if Kluber’s injury forces him to miss more than a couple months, things may even be in the Twins’ favor on paper.