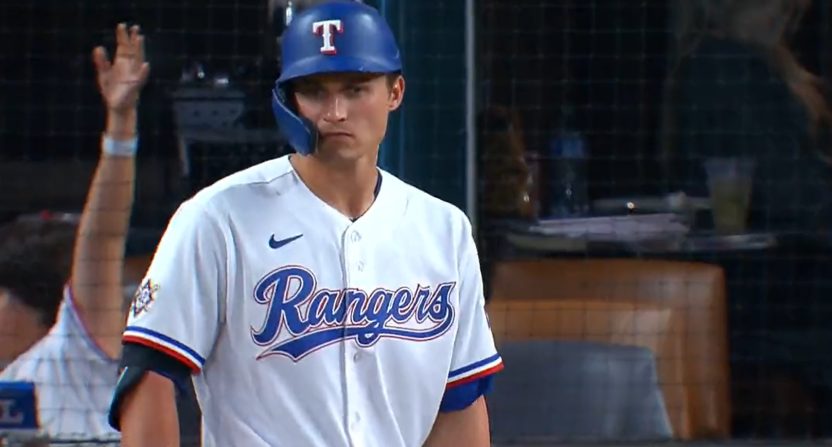 In the bottom of the fourth inning of Friday’s game against the Texas Rangers, the Los Angeles Angels gave Texas shortstop Corey Seager the ultimate sign of respect.

Seager came to the plate with the bases loaded and one out. Rather than try to get Seager out, the Angels put four fingers up, intentionally walking him to bring in a run.

This decision had people talking. A lot of the conversation centered around the superstar in the Los Angeles outfield — though there were other observations.

Walking in a run already down by one, with a fresh reliever in the game. You are better off pulling the pitcher & optioning him immediately bc you have no faith in his ability. Seager is an incredible hitter, but what is happening to baseball?

It was at this moment that Mike Trout realized he done goofed. https://t.co/3gsKUQW6GS

If this happened in an MLB video game we’d call it a bizarre glitch. https://t.co/Q4AUoAYrBh

might be the dumbest thing i've ever seen https://t.co/pIxQ0C1F9N

The Angels just intentionally walked in a run in the 4th inning instead of facing Corey Seager with the bases loaded/1 out.

This is not unprecedented. It happened with Barry Bonds in 1998 and with Josh Hamilton in 2008. Hamilton’s walk came against the Tampa Bay Rays, who were then managed by Joe Maddon — who presently manages the Angels.

Intentional walks with bases loaded, since 1950:

Tonight & '08 were vs Joe Maddon-managed teams

But the Bonds and Hamilton situations were a lot different. Both of those situations happened in the ninth inning with two outs. Additionally, both Bonds’ Giants and Hamilton’s Rangers were trailing in the game.

The walk moved Bonds’ Giants to within one run. But it also must be remembered that Bonds didn’t start that game. As such, he was not batting in the middle of the order in front of a dangerous hitter like Jeff Kent. So, while the walk scored a runner and moved the winning run to second base, it was calculated — and it worked. The Arizona Diamondbacks retired the next hitter, Brent Mayne, and won the game.

Hamilton, meanwhile, came up with the bases loaded and his team trailing by four runs. The walk was risky. It scored a run, put the tying run on base and brought the go-ahead run to the plate. But ultimately, fearing a Hamilton home run as much as a Marlon Byrd extra-base hit is also a well-thought-out response. Similarly, it worked.

In both cases, even if the decision had backfired, it would be easy to understand what the manager was thinking. In this case? Not so much.

This was in the middle of the game with the Angels already trailing. The walk not only allowed Texas to go up by another run, but also kept the man at third with less than two outs situation. The Rangers took advantage of that, when Mitch Garver hit a sacrifice fly. Marcus Semien then scored on a balk. So, Texas scored three runs out of the situation, only one fewer than would have scored with a grand slam by Seager.

Maddon is one of the best managers in baseball. He entered Friday’s game with a career record of 1358-1191. But in this case, he might have out-thought himself.