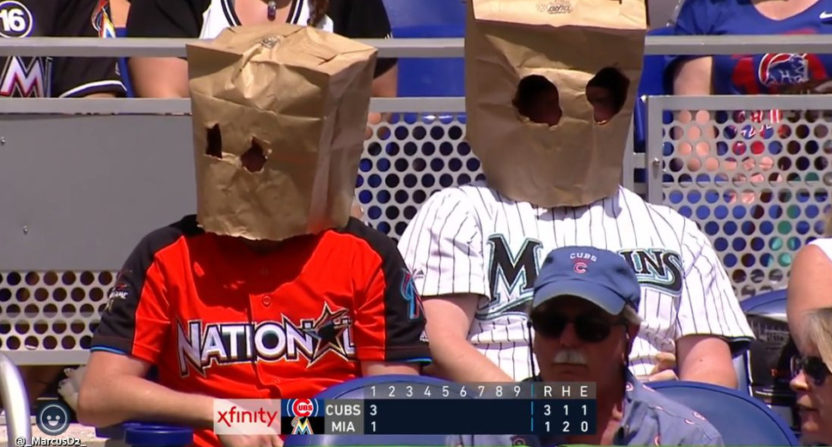 It’s hard to imagine an ownership transition going much worse than the Marlins change from Jeffrey Loria to the Derek Jeter/Bruce Sherman-led consortium known as Marlins Teamco.

As always, it must be noted that taking the reins from Jeffrey freaking Loria should be the easiest bar in the world to clear, but Jeter and company have so far tripped a few yards shy of the bar, stumbled wildly forward while waving their arms around in cartoonish fashion, and then finally fallen face-first into the bar, chipping a few teeth.

Earlier today, Matt talked about the laughable attendance so far in Miami.

Sure enough, very few people have shown up to see the Marlins’ home games so far. The paid attendance for Marlins’ game on Monday night against the Mets? 7,003 people, the lowest paid attendance number in the eight-year history of Marlins Park.

Tonight's crowd of 7,003 in Miami was the second-smallest in any normal MLB game this decade. The first game on this list was in Williamsport, Pa. The next three were moved from Houston to St. Petersburg, Fla., at the last moment because of Hurricane Harvey. pic.twitter.com/lqn0H5BdDT

One possible solution to the attendance problem that Matt didn’t come up with: play some games in the British Virgin Islands, which according to recent court filings, is where the Marlins are based. Sort of. It’s complicated. The Miami Herald has more, via Douglas Hanks:

The Miami Marlins are claiming corporate citizenship in the British Virgin Islands in an effort to have a federally appointed arbitrator take over the lawsuit by Miami and Miami-Dade County to recover a share of the profits from Jeffrey Loria’s $1.2 billion sale of the team to Derek Jeter and partners last fall.

Lawyers representing the Marlins told a federal judge that at least one corporation that owns part of Marlins Teamco — the company Jeter and majority owner Bruce Sherman formed last year to buy the franchise — is based in the Caribbean. As a result, team lawyers argued, the dispute with Miami-Dade should be governed by jurisdictional rules that apply to international disputes.

Apparently the Marlins are represented by Barry Zuckerkorn.

Again, this is the Miami Marlins, an MLB team located in Miami. There’s a stadium there and everything. They’re involved in a legal dispute with the city of Miami and Miami-Dade County (and Loria), and they’re trying to claim federal jurisdiction because according to them they’re based in the British Virgin Islands. How did they do that with a straight face? The opposition was predictably appalled:

The legal argument drew a sharp brush back from county lawyers, who mocked the “Jeter Marlins” for invoking treaty law in a lawsuit involving a Miami baseball team and the municipal government that owns Marlins Park.

“This is the most local of disputes, involving a locally-negotiated contract made between local parties under local law and requiring local performance,” county lawyers wrote in arguing to keeping the lawsuit in Miami-Dade Circuit Court.

The Marlins are attempting to get the case into federal court because the local courts have so far proven unwilling to buy into their bullshit on just about anything regarding the sale. And that’s the root cause of the problem; that Loria claimed a net loss on his $1.2 billion sale of the franchise.

Miami, which owns the Marlins’ parking garages, and Miami-Dade, which owns the stadium, are entitled to a share of certain profits from a team sale. But Loria lawyers claim the formula for calculating those profits yielded a paper loss of $140 million for a team that the New York dealer bought for $159 million in 2002.

That’s some Enron-style accounting practice, and it’s hard to believe it’s going to hold up in court. The Miami Marlins, though, are now stuck in the legal battle as well, and this is their chosen tactic. The court filings give some fun insight into the structure of team ownership, too:

Nothing shady about that at all!

If this somehow works, it might actually cause more problems for the team and the league. You’d have to think MLB would face a lot of questions as to why they would approve the sale of a franchise to a group based in the Virgin Islands, and it might also encourage other franchises to use the precedent in an effort to have offshore operations. And while foreign ownership isn’t new (Nintendo owned the Mariners for years, after all, among others), this is a ridiculous idea.

How are the Marlins so bad at this?