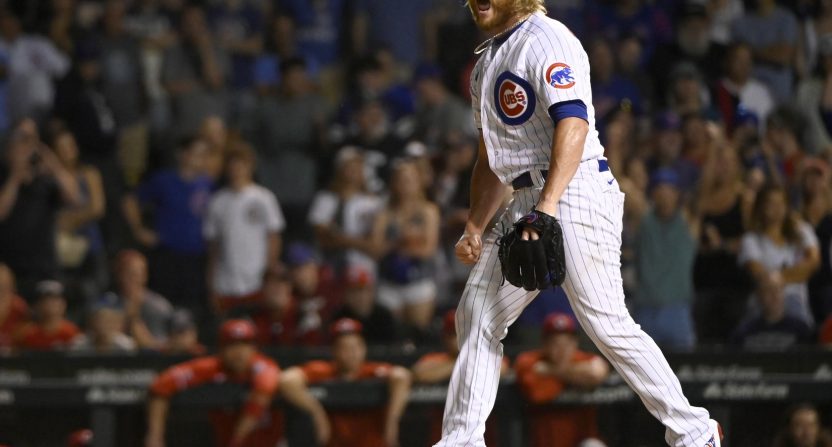 An elite bullpen is key to October success in MLB, and the Chicago White Sox bolstered theirs by acquiring the best reliever on the market – one who happened to already be playing in the city.

Craig Kimbrel is heading to the White Sox from the Cubs.

The cost for Kimbrel? Second baseman Nick Madrigal (currently on the IL) and pitcher Codi Heuer.

Kimbrel will essentially replace Heuer in the White Sox bullpen. After a poor start to his career in Chicago, Kimbrel has put it all back together this year. In 39 games, he’s allowed just three runs (two earned) all season, good for a 0.49 ERA. Over 36 2/3 innings, Kimbrel has struck out 64 hitters and walked 13. He’s also allowed just 13 hits all season, with just three of those coming over the last two months.

Though it might not look like it based on their 4.05 ERA, the White Sox bullpen has been quite good this year, led by closer Liam Hendricks (2.58 ERA in 45 games). Michael Kopech and Garrett Crochet have also showed dominance at times, as has Heuer, heading to the Cubs in this trade. The 25-year old has a 5.12 ERA on this season, but has still struck out 39 hitters and walked just 10 over 38 2/3 innings, following up a successful rookie season last year, when he pitched to a 1.52 ERA in 23 2/3 innings with 25 strikeouts.

Madrigal is the more famous name going to the Cubs in the trade, though he’ll miss the rest of the season following hamstring surgery. He’s a high contact, low power hitter, slashing .317/.358/.406 in 83 career games. The 24-year old has homered just twice in those 83 games to go along with only 24 strikeouts. That 7.4% K rate is the second-lowest in baseball among all hitters with at least 300 plate appearances over the last two seasons, behind another former Cub in Tommy La Stella. The Cubs will likely look at him as their long-term answer at second base beginning in 2022, though former first-round pick Nico Hoerner has gotten some time at the position this year and has a similar skill set to Madrigal.

The White Sox don’t need any help to win the division – they’re eight games up on an Indians team that hasn’t been able to put it together all season. It seemed like the Pale Hose would only be upgrading around the edges this week after acquiring Ryan Tepera and Cesar Hernandez, but bringing in Kimbrel is a bold statement.