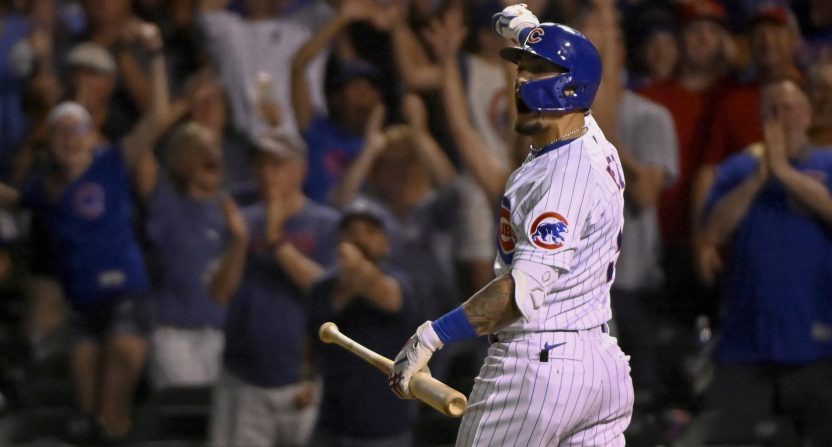 In another big trade deadline deal, the Chicago Cubs are sending away another player from their 2016 World Championship team, along with another possibly useful piece.

Javier Baez and Trevor Williams have reportedly been dealt from the Cubs to the NL East leading New York Mets.

Final Mets-Cubs deal will be Javier Baez and Trevor Williams for OF Pete Crow-Armstrong, the Mets' No. 5 prospect per @MLBPipeline.

The 29-year old Trevor Williams is probably far better than this 5.06 ERA implies. In 13 appearances (12 starts) this season, Williams has 61 strikeouts and 22 walks across 58 2/3 innings. His ERA has been driven up by  the sheer amount of home runs he’s allowed – ten so far this season.

The return for the Cubs is reportedly outfielder Pete Crow-Armstrong, the team’s fifth-best prospect per MLB Pipeline. The 19th overall pick in last year’s MLB Draft, Crow-Armstrong has played in just six games this season, and has been on the IL since the middle of May.

Where will Baez and Williams fit in with the Mets? The Mets have Francisco Lindor, currently on the IL with an oblique injury, entrenched at short, so Baez would need to move to either second (mainly home to Jeff McNeil this season) or third (Jonathan Villar). Villar, McNeil, and even Baez are versatile enough to play a variety of positions, so Luis Rojas will have some decisions on his plate when it comes to arranging his lineup. As for Williams, the Mets have plenty of starting pitching, but injuries have been an issue – Marcus Stroman is the only starter to top 100 innings so far this year. With Carlos Carrasco expected to soon come off the IL, a healthy Mets rotation could include Williams, Stroman, Carrasco, Jacob deGrom, Taijuan Walker, and Rich Hill, quite a fearsome array of starters.

But again – the injuries. How much can the Mets count on Carrasco, who hasn’t thrown an inning this season? Or Walker, who is already at his highest single season innings total since 2017? Or even Hill, who has made more than 25 starts in his career (he’s at 20 right now) just once? There’s a lot of uncertainty in that rotation, and while adding Williams may not seem like a huge deal, they need all the insurance they can get.