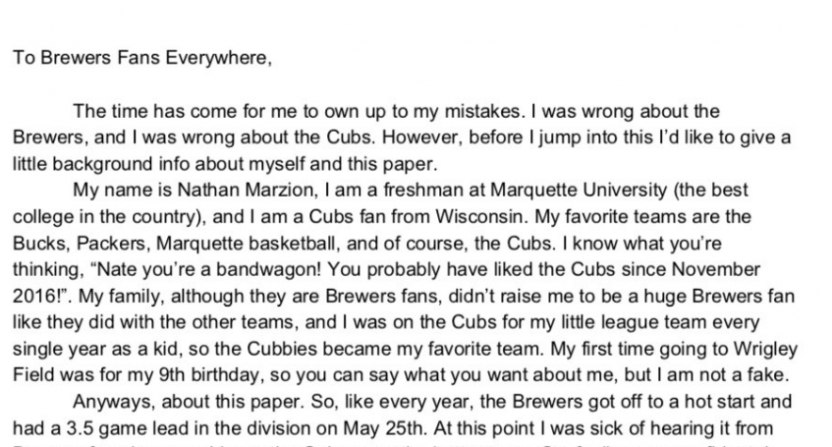 Benjamin Franklin once said that “nothing can be said to be certain, except death, taxes, and the fact that the internet will always remember.” How right he was.

In order to prove that last one, we have to go back to late May. At the time, the Milwaukee Brewers held a three-and-a-half game lead over the Chicago Cubs in the NL Central. While many Chicago fans might have thought privately that their Cubbies would eventually overtake the Brew Crew, one Cubs fan made his feelings rather public.

As I said before too, If the Brewers finish ahead of the Cubs this year I will write a 1,000 word apology letter and send it to everyone who likes this.

Well, you know what happened. The Cubs and Brewers finished the 162-game season in a tie for first place, necessitating a 163rd game in order to make things official. Monday, the Brewers came to Wrigley Field and took care of business, defeating the Cubs, winning the NL Central, and finishing the season ahead of them.

Marzion may have hoped everyone simply forgot about his offer but they did not. In fact, the Brewers themselves asked to see the letter.

And so, Nathan had to do what is required by law. He had to make good and write that letter.

Thanks, @natemar3i0n. We got our letter. We appreciate you being a good sport! Go Brewers! #OurCrewOurOctober pic.twitter.com/T66rAUirD4

As apology letters go, it’s a pretty good one. Credit to Marizon for not half-assing it and actually laying it all out there in defeat.

Hopefully, he kept a little bit in the tank, however. Considering another offer that he made on the internet earlier this month, he might have a bit more writing ahead of him.