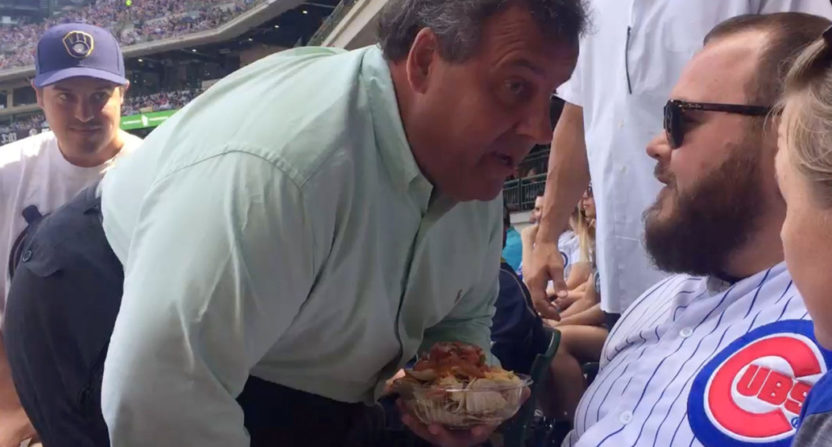 New Jersey Governor Chris Christie has a lot of trouble making positive headlines. Even when he tries to enjoy a nice day at the ballpark, he winds up getting booed and heckled. At a Cubs-Brewers game over the weekend, Christie apparently had enough jeers as he decided to get in the face of one heckler.

In a lengthy Facebook post, the Cubs fan, named Brad Joseph, explained how the altercation started with some pretty uncreative quips:

Some other fans at the game were already heckling him, so I yelled his name and he turned around, at which point I shouted “You Suck!” and then I sat back down. A few minutes passed and he returned to his seat. He got a few rows farther down from where I was sitting and he paused for awhile; there was nobody blocking his path and no reason for him to be blocking the aisle and our view of the game. At this point I told Christie that he was a “hypocrite.”

Eventually, Christie decided to respond, and Joseph claims the governor tried to get physical.

I was seated at the end of our row, and Christie turned around and made his way up the few steps that separated us. As he approached he looked at me and said “Have another beer,” which caused me to laugh, since I thought it was a decent comeback under the circumstances despite the fact we hadn’t been drinking at all, but Christie quickly made it clear that he wasn’t joking around. He came a few inches from my face and began to call me a “big shot,” and a “tough guy,” and asking “what are you gonna do now?” He was close enough that I could feel his breath on my face as he shouted at me. He never denied being a hypocrite. Then, his right foot stepped well outside of the aisle and into our row, and he began to hit my leg with his knee in an aggressive fashion.

At this point I heard someone ask “what is going on?” to which I turned and calmly replied, “well, this guy is accosting me.” Christie was incredulous at this characterization of the interaction, despite the fact that he was the one who initiated physical contact, and despite the fact that his tone and conduct were intended to provoke a reaction to which his security detail could respond. I sat calmly in the back of my chair as Christie became frustrated with my refusal to turn a verbal confrontation into a physical one. After calling me a big shot a few more times, he relented and turned away, as I thanked him for his opinion.

Joseph may not have been willing to respond physically at Miller Park, but in his Facebook post he made clear he’s willing to retaliate eventually. He challenged Christie to a fight sanctioned by the Nevada Athletic Commission:

To anyone who wants to claim I backed down, all I’d say is that I’m not going to punch a sitting governor when I know there are federal agents assigned to protect him standing behind me no matter how much he provokes me. If Chris Christie wants to fight fair, Tuff ‘n’ Uff, the premier amateur mixed martial arts group, has already agreed to put on an event sanctioned by the Nevada Athletic Commission. I’ll agree to compete under any standard rules you want, whether its MMA, boxing, freestyle, folkstyle, or greco-roman wrestling. Just let me know if you still want to make this physical. You won’t even have to cut any weight. I doubt you’ll agree to it, but McGregor-Mayweather surprised us all.

It’s up to Christie now. All he has to do is agree.