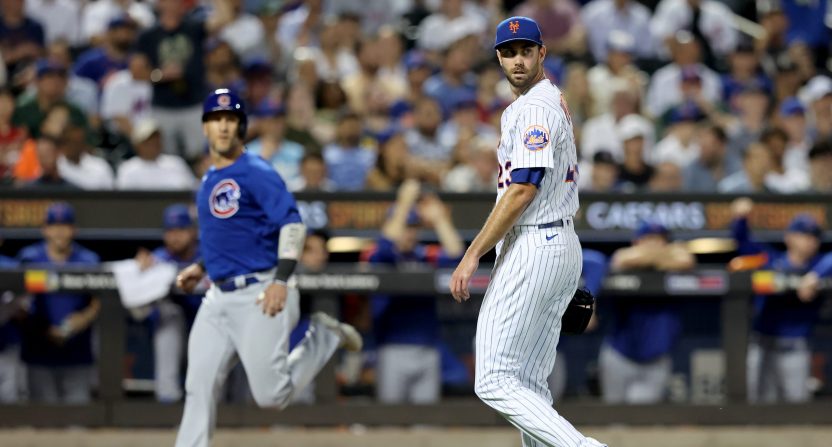 The New York Mets are in search of their first 90-win season since 2015 (when they won exactly 90 games), and they needed to beat the rebuilding Chicago Cubs just once in a three-game series at Citi Field to get it done.

Well, after those three games, the Mets are still stuck at 89 wins. And they missed a golden opportunity to create some separation from the defending champion Atlanta Braves in the NL East (the Mets have a half-game lead; it was as high as 10.5 games in June).

The Cubs took down the Mets 6-3 on Wednesday night to complete a three-game road sweep. Chicago scored all six runs before the Mets got even two outs in the first inning. Mets left-hander David Peterson was pulled after getting just one out, and he was charged with five earned runs.

This comes one day after the Cubs pulled off the biggest upset — by the betting line — in MLB since 2019, taking down Jacob deGrom in a 4-1 victory.

The Cubs (+340 ML) just pulled off the biggest upset in MLB since September 2019 🤯 pic.twitter.com/bXDDcpcL5e

While the Cubs scored six runs through just one out on Thursday, the Mets scored six runs in the entire series. The Cubs are a rebuilding team that traded four relievers in-season (including Mychal Givens, who pitched in this series for the Mets), and they were without two of their best players all series in Nico Hoerner and Willson Contreras (out with injuries). The Mets are a team trying to win the World Series.

Naturally, the baseball world has had a lot to say about the stunning sweep:

The @Cubs are the first team in MLB history to have 30+ fewer wins than their opponent entering a 3+ game road series and yet sweep the series winning every game by 3+ runs.

Last team to suffer such a sweep: Detroit Tigers in the final 3 games of the 1968 regular season.

Coming into this week, the Mets hadn't been swept all season. pic.twitter.com/NvkUe1nQpO

Yes, the Mets are stinking. That’s undeniable. But give David Ross and the Cubs credit, too, for continuing to play hard.

Mets to the Cubs at the Trade Deadline: "We don't need to make a bigger trade. Get outta here."

Mets to the Cubs tonight: "Daddy."