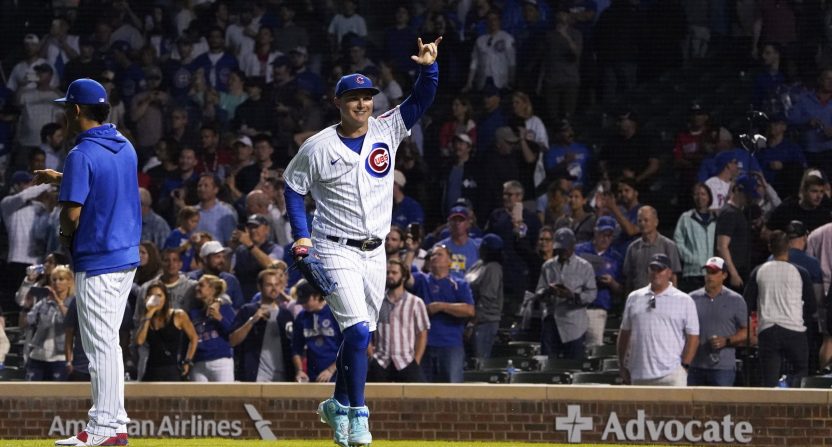 After being in first place in the NL Central just a couple weeks ago, an 11-game losing streak led to the Chicago Cubs (44-46) being eight games back of the Milwaukee Brewers entering the All-Star break. FanGraphs currently has the Cubs’ playoff chances at 4.1%.

While some organizations may wait it out a bit in this spot (hey, it’s a 1-in-25 chance; crazier things have happened!), the Cubs have already decided their trade deadline plan- and it’s what many evaluators assumed Cubs president of baseball operations Jed Hoyer wanted to do all along anyway, with the team having so many big-name upcoming free agents, and with doubts about the ownership’s willingness to spend like the big-market organization they are anytime soon.

The Cubs have officially become sellers with the trade of outfielder Joc Pederson to the Atlanta Braves on Thursday night- before the second half of the season even begins. Chicago gets first base prospect Bryce Ball back in the deal.

The #Cubs today acquired minor league 1B Bryce Ball from the Braves for OF Joc Pederson. pic.twitter.com/cy3W5dqWXn

This is a smart trade for each organization considering their current situations.

Last week, the Braves lost superstar outfielder Ronald Acuña Jr. for the season to a torn ACL. That’s a crushing blow to their team and playoff chances on the surface; FanGraphs currently gives the Braves a 7.5% playoff chance. But at the same time, the Braves (44-45) are only four games behind the New York Mets in the NL East. And does anybody actually have full conviction in the Mets to not blow this/suffer some significant Metsing? Of course not. It’s a winnable division. Additionally, if the Braves were to fall more games back over the next two weeks, they can still trade Pederson somewhere else to help make up for what they gave up to get him.

What exactly are the Braves getting in Pederson? That’s a great question! The 29-year-old has a .238/.300/.418 slash line on the season (while serving as Chicago’s primary leadoff hitter), one year after being even worse with the Los Angeles Dodgers at .190/.285/.397. He’s also a below-average corner outfielder, valued at -4 defensive runs saved this season. The offensive and defensive struggles from a non-premium position have led to him being valued at 0.2 wins above replacement this season according to FanGraphs, after a -0.1 WAR in 2019 (but was at 3.0 WAR in 2019).

So, the Braves improved their team and showed that they’re still trying (which matters to the clubhouse and for fans to keep showing up to games), while not destroying their farm system in the process. And again, they still have the opportunity to trade Pederson for something if things fall apart by July 30. For a team on the fringes, this is the kind of move that makes sense. If they go on a big winning streak in the next two weeks, maybe they make a more substantial move and dip into their higher-rated prospects.

And while Ball isn’t a big-time prospect, he’s still a great return for the Cubs.

Ball, listed at 6’6′” 240, will be limited to first base and won’t offer much if any value defensively, but he’s a highly intriguing offensive prospect. FanGraphs ranked Ball as Atlanta’s No. 11 prospect entering this season (with a 40+ Future Value), and here’s part of what FanGraphs’ Eric Longenhagen and Kevin Goldstein had to say about Ball in their write-up on the Braves’ top-30 prospects:

Ball hasn’t just hit, he’s mashed everywhere he’s gone. In two years at North Iowa Area Community College, he put up an 1.108 OPS. Transferring to Dallas Baptist for his junior year, he dipped to a 1.057 mark. Still, he wasn’t heavily scouted and the Braves nabbed him in the 24th round of the 2019 draft. From there, he just kept crushing baseballs, putting up a 1.023 OPS in his 62-game pro debut. Ball is an exceptionally large human being who combines raw strength and long levers to produce easy, double-plus raw power. What separates him from most power goofs is some intrinsic hitting ability as well, as while he’ll never be confused with Luis Arraez, he makes more contact than most players with his profile.

Additionally, the Cubs may not re-sign first baseman Anthony Rizzo over the winter (it’s possible they even trade him this month; more on that to come), and the designated hitter (which could be Ball’s ultimate “position”) is surely coming to the National League soon.

For 2.5 months (perhaps more if the Braves can get into October) of a corner outfielder that has been a replacement-level player over the last two seasons, the Cubs couldn’t expect a better return than this. And that’s why Hoyer didn’t waste any time to make the deal. Additionally, there’s Tom Ricketts’ favorite part of the trade: the Braves are responsible for $2 million that Pederson is owed the rest of this season, to go with a $10 million option and $2.5 million buyout in 2022.

Pederson, who’ll play RF, is owed about $2M of his $4.5M salary for rest of 2021, and there’s a $10M mutual option for 2022 with a $2.5M buyout, which #Braves are responsible for. Anthopoulos knows him well from Dodgers, said possibility of having him another year was attractive.

This is just the beginning and a light appetizer for the Cubs’ role as sellers this month. Relievers Craig Kimbrel, Andrew Chafin, and Ryan Tepera are all likely to be dealt (along with Rex Brothers and Dan Winkler if the Cubs can get even a lottery ticket-level prospect in return).  Kris Bryant, Javier Baez, and the aforementioned Rizzo — all upcoming free agents — could also be dealt (if the return for each of them outweighs a comp pick, at least), especially if the Cubs don’t intend to make a serious effort to pay big dollars to those players over the winter. Stay tuned for what will be a wild two weeks and a very different-looking Cubs roster come August.