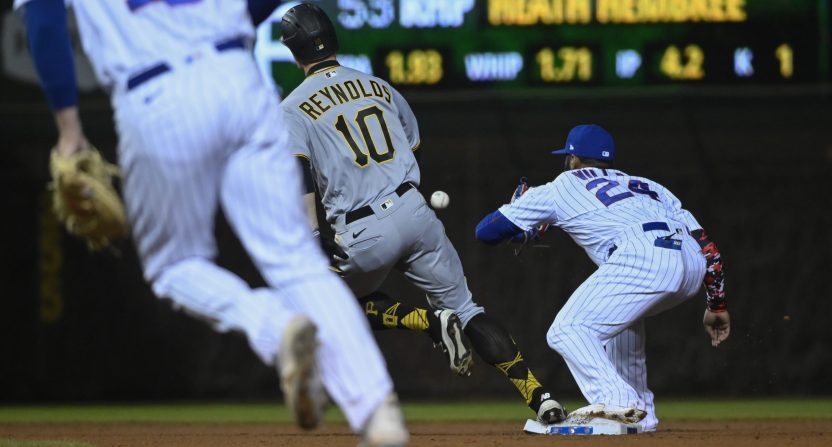 Thursday night’s game between the Pittsburgh Pirates and Chicago Cubs featured a triple from Pittsburgh’s Bryan Reynolds. That, in itself, isn’t noteworthy. How the play happened, though, was.

Reynolds got jammed on a pitch and sent it down the third baseline. But with the Cubs shifting, there was nobody there to field the ball. It seemed like Reynolds would get a double on the play but on his way to second, he realized something. Nobody was at third. With that, he kept running and found himself on third base with a triple.

The ball had an exit velocity of 49.4 mph. pic.twitter.com/ObsoqZ7bJS

If this feels like déjà vu, it kind of is. In a 2021 game between the two teams, Javier Báez (then of the Cubs) made a great baserunning play. That, coinciding with the epic failure of the Pittsburgh defense, allowed a run to score. This time, though, the teams were in opposite roles.

The comparisons between the two plays did not go unnoticed.

Make sure y’all keep the same energy for this as y’all did with Will Craig last year. https://t.co/K1caSEU8IC

That was not the only observation MLB fans made about this play, though.

This reminds me of @Coach_Nall running bases on the show but there was defenders in the right spot haha @coachcorywelch https://t.co/3fLIA89LGW

Bill Schroeder is somewhere laughing about how, “exit velocity is overrated!” https://t.co/PlqZWIVwBW

This is embarrassing yet I’m smiling at the same time I hate it https://t.co/Jh1YAJCu0x

Plays like this get me so fired up! Go hard until they force you to stop! https://t.co/nGsZkdZ8Rg

Nothing better then a shift gone wrong… https://t.co/fRtcM77Zuy

If baseball is gunna move more and more into the shifting and moving players around the diamond, defense has to communicate better – catcher/pitcher have to communicate together, lack on concentration can really hurt https://t.co/4Q45r3YxtM

It’s easy to blame the shift here but the reality is, the hit itself is an understood risk. In overshifts like this, if a batter wants to get a hit, all he needs to do is drop a bunt down. As long as it can’t be fielded by the pitcher or catcher, he can walk to first base. Defenses will generally be willing to absorb softly-hit doubles. They have to be because jammed swings going against the shift will happen.

What the Cubs did here, though, is harder to accept. They completely dropped the ball on the defensive rotation. The normal defensive roles change. The pitcher would not usually cover third base but in this situation, he had to. The third baseman had to chase the ball down. Either of the two middle infielders could have broken to third, as well. It’s a long run but all they had to do was be ahead of Reynolds and he would have stayed at second.

Chicago did work its way around the defensive blunder. Reynolds was stranded at third. Still, the Pirates won the game 4-3.