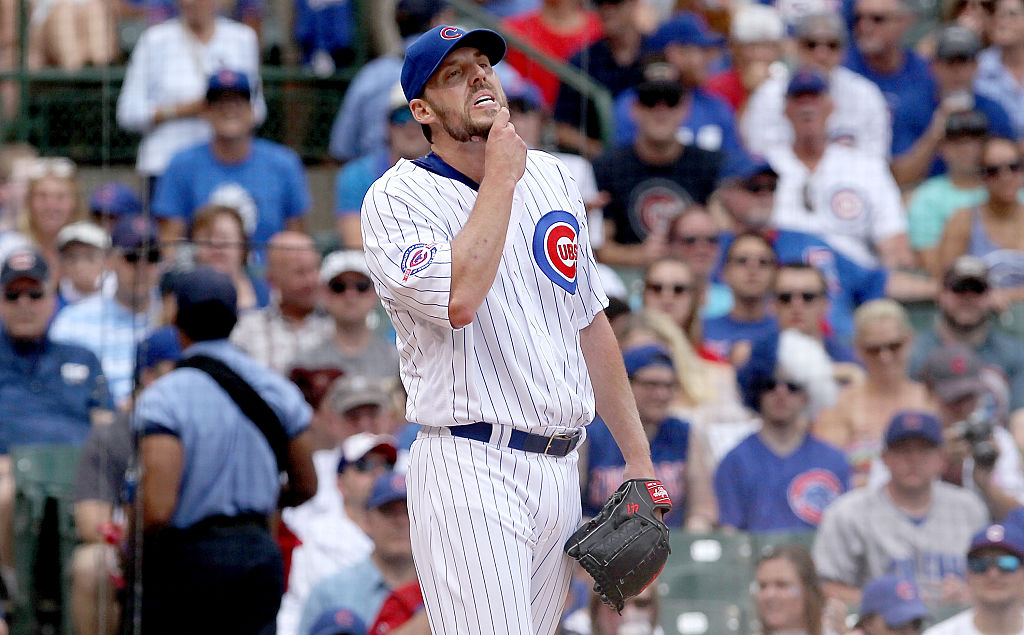 Is it time to hit the panic button for the Chicago Cubs and their fans yet? Maybe that red button has already been pounded a few times over the past week or so.

Following a dominating April and May during which the Cubs very much appeared to be the best team in baseball and entirely capable of fulfilling the sky-high World Series expectations placed up on them, it’s been a slog of a summer in Wrigleyville. After Thursday’s 4-3 loss to the Atlanta Braves in 11 innings, this Cubs team looks like it needs the All-Star break in the worst way.

(Of course, next week won’t present much of a respite with infielders Anthony Rizzo, Ben Zobrist, Addison Russell and Kris Bryant voted into the National League All-Star starting lineup. Also going to San Diego for MLB’s midsummer classic are outfielder Dexter Fowler, along with pitchers Jake Arrieta and Jon Lester. Between traveling from Pittsburgh to the West Coast after this weekend’s series with the Pirates and being involved with Monday and Tuesday’s festivities, that’s not much time off for the Cubs’ star players. Maybe Wednesday and Thursday will be enough of a break.)

With that loss to the Braves, the Cubs have lost seven of their past eight games. What might be more concerning is that some of those losses were decisive, with the starting pitching that was supposed to be a strength suddenly looking vulnerable.

Jason Hammel was pummeled for 10 runs and nine hits in a 10-2 defeat by the New York Mets. The Mets also rocked Lester for eight runs and nine hits (three of them home runs) in a 14-3 loss. In his past two starts, NL Cy Young Award winner Jake Arrieta has given up nine runs and 12 hits in 10.1 innings. John Lackey has allowed 14 runs and 18 hits in his past three starts.

Yes, those are small sample sizes and pitchers are bound to tire out after playing seemingly endless baseball for three months. But starting pitching depth appeared to be a concern coming into this season and if arms are beginning to become weary, where are the replacements that can step in when the veterans need a rest? And if the starters can’t be effective, that places a greater burden on a bullpen that many perceive as the Cubs’ most apparent weakness.

Manager Joe Maddon can take Adam Warren from the bullpen and use him for a spot start to provide some more rest for the regular rotation, a swingman role that suits him. But it shouldn’t be a surprise that team president Theo Epstein is checking around the league for starting pitching. The question is whether or not it’s better to utilize resources to add another top-tier starter or bolster the bullpen. Relief help would presumably be less expensive, but if the targets are Andrew Miller and Aroldis Chapman, the Yankees likely think otherwise.

Another less obvious issue may be the absence of Dexter Fowler from the top of the lineup. That development seems ironic, given that Fowler was very nearly not on this year’s Cubs team until he was surprisingly re-signed. But without him batting leadoff, the top of the order doesn’t make opposing pitchers extend at-bats by taking pitches and fouling them off. Fowler and his .398 on-base percentage helps set up the offense for sluggers Bryant and Rizzo.

Why Maddon hasn’t batted Zobrist in the No. 2 spot behind Fowler this season, opting instead for Jason Heyward — whose .330 OBP is respectable, but isn’t putting the ball in play much, hitting .237 — is one of this season’s great mysteries. Presumably, Maddon likes an on-base threat and contact hitter batting fifth behind Rizzo, helping to extend the lineup. But that’s a moot point with Fowler on the disabled list with a hamstring injury and Zobrist hitting leadoff in his place.

Perhaps the return of Tommy La Stella (361 OBP this season), who batted leadoff Thursday night, helps the top of the lineup. But does he have an everyday role? Can Maddon get him regular at-bats by moving guys around, putting Bryant or Zobrist in the outfield. Or is that just expecting too much from someone likely best suited for a reserve role?

Maybe there’s nothing wrong with this team that won’t ultimately be fixed by Fowler and Jorge Soler returning from injuries, allowing Maddon to use the Cubs’ bountiful roster depth to full advantage. Adding a top reliever and perhaps a mid-rotation starter — both of which seem attainable — will also help, of course. Epstein and general manager Jed Hoyer aren’t going to squander the opportunity to win, even if the Cubs’ window should stay open for quite a few years.

Over the course of a 162-game season, a team is bound to have a rough stretch. It’s been pointed out many times in many outlets that a team good enough to win 100 games will still have lost 62. Though the Cubs got off to a hot start which made a World Series title seem nearly inevitable, only two months of the regular season had been played. The season might never seem longer than for a team that just wants to get back to the postseason and fulfill championship expectations.

How do you avoid peaking too early? How much risk is involved in playing with less urgency in the first half of the season, figuring that a great team can just turn it on when it’s time to win? A high level of play can be maintained throughout a long season, but since the Cubs are a relatively young club and have to carry the baggage of the franchise’s losing history, it’s natural to turn pessimistic and overreact.

This team may also really benefit tremendously from some time off from the season-long grind. Even if those great expectations will probably increase as the baseball and sports worlds take a breather, look back at the first half of the season and try to project how the next three months will go.

The Cubs’ recent struggles have allowed the San Francisco Giants to step over them in the overall National League standings, while the Washington Nationals, Texas Rangers and Cleveland Indians are all closing in their record as well. That competition might be a good thing, providing the motivation Maddon needs to keep his team sharp when their first-place NL Central lead over the Cardinals and Pirates is still comfortable and the largest in MLB. Any edge he can find to stave off complacency will surely be welcome — and could be crucial.