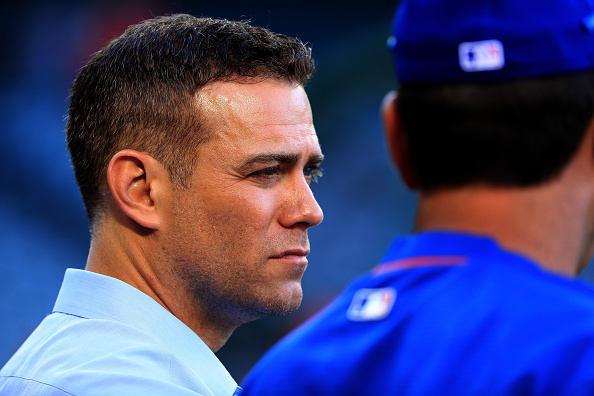 Chicago Cubs president Theo Epstein and general manager Jed Hoyer are frequently reminding the media that the organization is always on the lookout for cost-controlled starting pitching. Just last week, Epstein made that clear:

“We are always looking to add long-term starting pitching. Sometimes the trading deadline can be a better forum for that than the offseason. Sometimes it is not. It is important to stay focused this time of year on this year’s club. You still want to keep one eye on opportunities that can help you down the road as well.”

But this is where it gets really interesting. Rosenthal adds that the Cubs planned to then spin Pomeranz to another team, for a starting pitcher that is under longer control than Pomeranz (2018):

The Cubs’ plan, though, wasn’t to keep Pomeranz, who is under club control through 2018. No, the Cubs wanted to spin Pomeranz for a starter who is under even longer team control.

So, who is the starting pitcher the Cubs were targeting? Rosenthal was only told that it’s a “name that is not out there publicly”:

I could not determine the identity of that starter — it was a pitcher whose “name is not out there (publicly), and probably is not going anywhere now,” one source said.

Rosenthal says that the Padres wanted infielder Javier Baez from the Cubs, and the Cubs unsurprisingly said no to that asking price, as the 23-year-old Baez is already a very valuable player for them — and a Joe Maddon favorite — with loads of upside.

In any case, the Cubs balked at the Padres’ request of infielder Javier Baez for Pomeranz, believing it too high a price.

The Cubs’ main need is without question in the bullpen, but it makes sense that they would be interested in cost-controlled starting pitching. Yes, Chicago’s starting rotation currently leads all MLB rotations in ERA at 3.03, and they really don’t have a notable hole in the rotation. Jason Hammel isn’t anything special and has a history of having his numbers decline in the second half, but he’s still sporting a 3.34 ERA (and has found a special potato-chip diet), and we’re talking a No. 5 starter. Should the Cubs make the playoffs (they currently have 97.5% playoff odds per FanGraphs), they’re only going to be using four starters.

However, injuries happen, and you don’t know when they will. What if Jake Arrieta, Jon Lester, John Lackey, or Kyle Hendricks were to suffer a serious injury from August-October? Having that depth could prove to be huge.

Additionally, the starting rotation looked a bit gassed before the All-Star break, and Hoyer said on Tuesday that the team has not discounted the possibility of a six-man rotation which would help keep the starters fresh for the rest of the season:

GM Jed Hoyer said a six man rotation would not be out of the question . He was responding to acquiring a starter scenario

And the main thing with this whole idea is of course the long-term aspect of it. Lester and Hendricks are the only Cubs starting pitchers under team control after 2017, and Arrieta is likely to go to the highest bidder in free-agency after the 2017 season. So, while they may not find an Arrieta “replacement”, they’re looking for another quality long-term pitcher to put into their post-2017 plans with Lester and and Hendricks, and their farm system is currently lacking any clear candidates there.

It will be interesting to see if any additional information emerges on the pitcher they wanted to swing Pomeranz for, and to see if the Cubs indeed make a trade for a starting pitcher before the deadline.