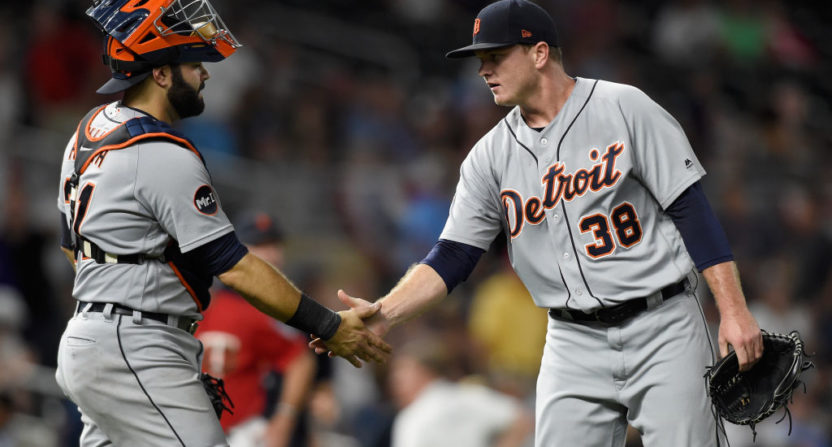 The Cubs kind of kicked off the trade season with their deal for Jose Quintana, which has already paid dividends. They now lead the NL Central by 1.5 games, including three games in the loss column, having taken two of three in Milwaukee this weekend.

That certainly seemed like a statement series for the Cubs, and the trade they pulled off last night punctuates that statement nicely.

The World Series champions added both a good lefty reliever and a solid backup catcher in Justin Wilson and Alex Avila, respectively, while not dealing anyone off their major league roster.

cubs, tigers are in agreement on deal. candelario the big piece in package to tigers. avila brings experience, good d to back up contreras.

Source: #Cubs, if deal is completed, will get Justin Wilson and Alex Avila from #Tigers for Jeimer Candelario and at least one other. Close.

The deal would be Justin Wilson and Alex Avila for Jeimer Candelario, Isaac Paredes and a Player To Be Named Later or cash, I'm told.

Jeimer Candelario has been in the Cubs system for some time now, and has actually played 16 games in the bigs over the past two seasons. But he’s a corner infielder, and the Cubs have perhaps the best corner infield combination in the majors in Kris Bryant and Anthony Rizzo. Isaac Paredes is a good shortstop prospect, but he’s in low-A and years away, while the Cubs are in the kind of contention window that makes those players expendable, especially in the right deal.

And it’s hard to argue this isn’t the right deal. Justin Wilson is under team control through next season, and he’s been a solid reliever for Detroit this year. The Cubs don’t have many holes, but tough lefty reliever is probably one of them, and Wilson allows Joe Maddon flexibility to use Mike Montgomery in different ways, while building a stronger bridge to the lights-out arm of Wade Davis.

Alex Avila has been amazing this year, although he’s regressed of late. That said, he’s already been worth 1.9 fWAR so far this year, and he’s a clear upgrade to the departed Miguel Montero (well, organizationally departed) and the talented-but-untested Victor Caratini. As with the Quintana trade, it’s a deal that helps the Cubs both this season and beyond, and once again they didn’t have to trade any players they’re likely to need in the near term.

For the Tigers, they’re not likely to miss either player, and it’s plausible this was the best deal on the table. Paredes was well-regarded, and Candelario should be able to help them as soon as this season, although they’re not contending and likely won’t be in the near future.

Theo so ruthless he literally will take your first born Son. https://t.co/7ZjYsCpq8e

Sending your son to a pennant race is a very kind gesture, though, if you think about it. This is a great deal for the Cubs, and seemingly a good deal for the Tigers. The only downside is for the Brewers, and any potential playoff opponents.