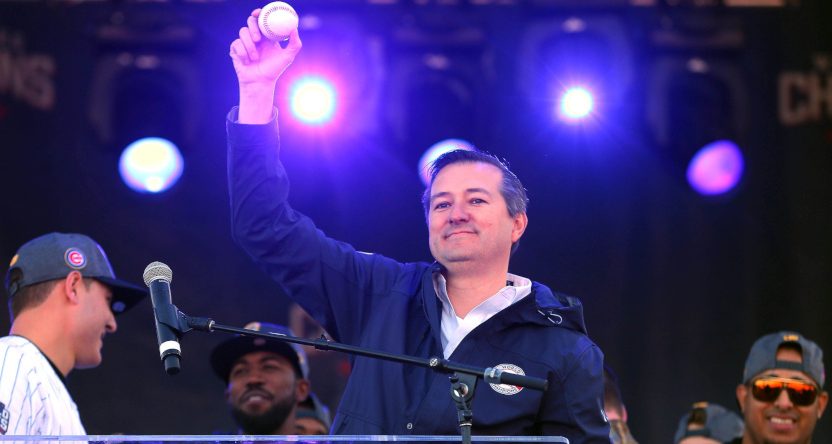 With Bryce Harper, Manny Machado and plenty of other MLB free agents still unsigned after full squads have already reported to spring training, there have been a lot of concerns expressed about low spending and even potential collusion from the MLBPA, individual players, and fans. And that’s led to some absolutely ham-fisted and counterfactual attempts to defend offseason non-moves from owners, with the latest coming from Chicago Cubs’ chairman Tom Ricketts. Ricketts (seen above at the team’s 2016 World Series parade) had a whole lot to discuss with the media at spring training Monday, from his father Joe’s racist and Islamophobic emails to the team’s upcoming RSN deal with Sinclair, but perhaps  the most astounding comments he made were in response to questions about the team’s lack of free-agent spending. Here’s more from Mark Gonzales and Paul Sullivan of The Chicago Tribune:

On the free-agency issue, the Cubs have not been active suitors for Manny Machado, Bryce Harper or any of the other big-money players available.

“We don’t have any more (money),” Ricketts said. “The fact is we’ve been in the top five in baseball spending for the past five to six years. We’ve put our money back on the field. Unfortunately, you just can’t have a high-profile free agent every year. And part of that is how much it costs — $25 (million) to $30 million (a year), plus a 10-year commitment.

“We’re well-positioned to win the division again. And as much as I would love to have a great, new, exciting player every season, it can’t happen every year.”

Ricketts said giving robust raises to Kris Bryant and Javier Baez through arbitration and picking up the $20 million option on left-hander Cole Hamels was necessary to keep the team competitive now while providing financial flexibility “to keep the players we want to keep in the long run.”

First off, a member of the Ricketts family crying poor is hilarious (CBS News estimated their combined net worth at $5.3 billion back in 2016, when co-owner Todd Ricketts was nominated for deputy secretary of commerce; he withdrew in 2017 citing an inability to divest his holdings, and is now the Republican National Committee’s finance chairman). But even if you believe that owners shouldn’t invest any of their personal money into their team and should instead only reinvest what it’s making, the Cubs would still likely come up short.

In April 2018, Forbes valued the Cubs as worth $2.9 billion (third in MLB), with estimated revenue of $457 million and estimated operating income of $102 million. That operating income was the highest in MLB. And yes, their current projected payroll for 2019 ($226 million, as per Spotrac) puts them in the luxury tax (and would have ranked second in MLB in 2018, behind only the Red Sox), and boosting it dramatically by signing a Machado or a Harper would lead to higher tax penalties for crossing the $246 million threshold. But as Brett Taylor wrote at Bleacher Nation in November, those penalties really don’t seem all that significant to a team that’s already making as much as the Cubs do:

Imagine the Cubs decided they were going to make only ONE other move this offseason: signing Bryce Harper to a monster 10-year, $340 million contract. The average annual value of that deal is $34 million, and that’s what would be added to the Cubs’ $226 million 2019 payroll estimate. We’ll again assume no significant in-season trades just to keep things in context.

That would leave the Cubs’ 2019 payroll for luxury tax purposes at a whopping $260 million. That’s a lot! And it’s over the top tier of the luxury tax, so here comes the whammy! … well …

It’s not, especially when you consider the wealth of the Cubs and their owners. And as Ryan Davis noted at Forbes in January, the Cubs’ average payroll has been 11th in MLB considering all the years since Theo Epstein arrived in 2012, and they’ve only paid luxury tax once (in 2016, where they paid $2.96 million). They were fourth in payroll last year and seventh over the last four years (where they’ve been legitimate contenders, rather than the rebuilding team in the early Epstein era). And they’ve just signed that new deal with Sinclair, including an ownership stake, so they’re set up quite well for the future. For that team’s chairman to say “we don’t have any more (money)” is ludicrous.

Look, if the Cubs don’t want to sign Harper or Machado, they certainly don’t have to. But things get a little suspicious when absolutely no one is willing to sign those guys at a level compared to past contracts, or to sign other free agents at anywhere near what they were asking for, and when every team is simultaneously crying poor despite historic revenues, when teams paid the lowest luxury tax bill in 15 years last season, and when many teams are suddenly offering players similar contracts. That leads to people bringing up collusion, something MLB has a long history with. And a claim from Tom Ricketts, one of the wealthiest owners in baseball and the man in charge of a team with the highest operating income last year, that the Cubs “don’t have any more (money)” is absurd, and it’s not going to quiet the collusion discussions. We get that you don’t want to pay more, but don’t claim that you can’t.