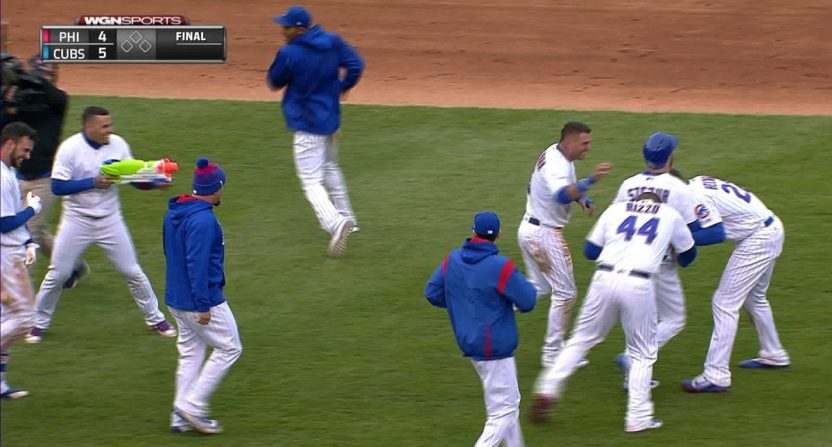 The Cubs and Phillies were tied 4-4 in the eleventh inning when Matt Szczur stepped to the plate. With one out, runners on second and third, and an 0-2 count, Szczur hit a grounder to second base.

And then, well, this happened:

That’s Albert Almora scoring the winning run from second after the throw went wild at first. It was tremendous baserunning, and it was great hustle by Szczur as well; the former Villanova wideout looked like he would have beaten the double play at first anyway, keeping the inning alive.

The best part of the video, though, is Javy Baez using some kind of Summoning Charm to Accio a Super Soaker into the dugout/onto the field for the celebration, spraying teammates left and right once the team decided just which teammate they should be celebrating with for the winner. (It’s always tough when it’s a non-traditional walkoff.)

Also, Javy, it was really cold in Chicago today! (For May, anyway.) The current Weather Channel “feels like” temperature, which is obviously gospel, is 42! If Kris Bryant has to miss games with hypothermia or something, this might come back to haunt the Cubs. (It won’t, that was just a terrible joke, please do not complain.)

The win was the third in a row for Chicago, and moves the Cubs to 16-12 overall just in time for the Yankees to come to the north side for a marquee interleague series.