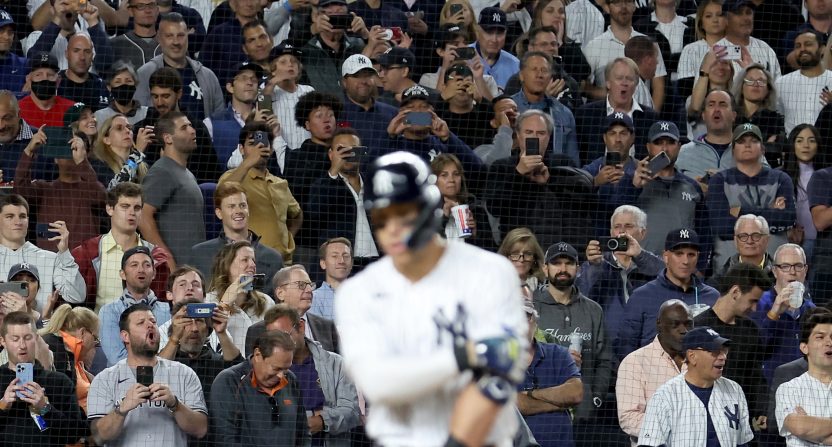 One thing that Curt Schilling has in common with Barry Bonds, Mark McGwire, and Sammy Sosa is that none of them are in the Baseball Hall of Fame despite putting up big numbers during their playing careers. While the other three are seemingly being kept out because of PED use, Schilling’s absence is likely more related to just a good, old-fashioned dislike of him as a person.

After Aaron Judge hit his 61st home run of the 2022 MLB season on Wednesday, Schilling appeared on OutKick’s “Don’t @ Me with Dan Dakich” and said that the doesn’t recognize the home run numbers that Bonds, McGwire or Sosa put up in their era because they all took performance-enhancing drugs.

“I don’t recognize anything that Sammy or Barry did knowing full well they had cheated. I don’t recognize any of that. That’s just personal,” Schilling said. “To me, that’s how I view it. The same reason why I wouldn’t vote for anybody that I knew did steroids for the Hall of Fame. I just wouldn’t do it. It doesn’t mean they don’t belong, doesn’t mean they aren’t a Hall of Famer, just means I wouldn’t do it.”

Schilling’s belief is a sentiment shared by many others in the baseball world.

“I look at this as [Judge] tied the all-time record. As of today, there’s nothing around him or surrounding him where we’re discussing about androstenedione in his locker or a relationship with BALCO or a personal trainer. … Doesn’t mean it won’t happen. … But don’t go to sleep on the fact that this guy’s having one of the greatest offensive seasons in history short of Bonds’ stuff. … His OPS is what some guy coming out of spring training who no one knows has at the end of April, and he fades off as a .250 hitter and goes back to Triple-A.”

“All of that being said, Shohei Ohtani is still the MVP,” he said. “You got a guy who has (about) 40 home runs. I know he’s 21 shy of Judge, but the fact of the matter is that he’s going to have 200 innings, 200 and something strikeouts, and he’s going to make 30-something starts, and he’s having a better year this year than he was having last year. You want to talk about value, that’s the ultimate value right there.”