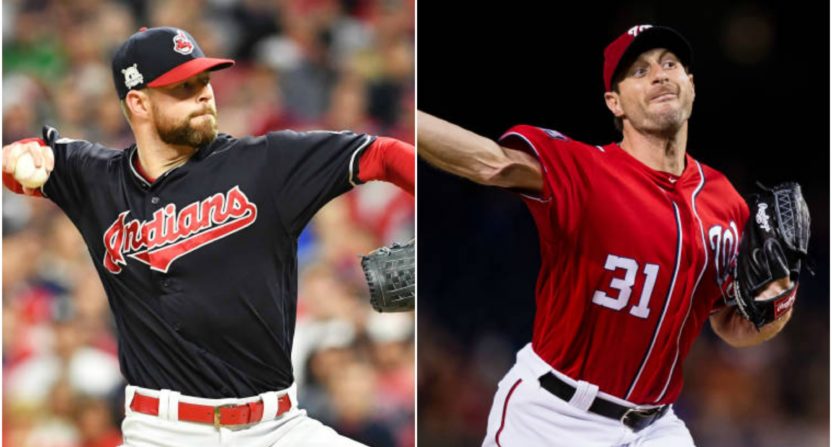 Is it possible to be a multi-time Cy Young winner and also kind of underrated?

Kluber won a well-deserved Cy thanks to an 18-4 record, a league-leading 2.25 ERA and a 2.50 FIP in 203 2/3 innings. After running neck and neck with Chris Sale for much of September, Kluber ended up taking the award easily, earning 28 of the 30 first-place votes. Every voter had Sale and Kluber first and second in some order, and two thirds of them placed Luis Severino third. Carlos Carrasco, Justin Verlander, Craig Kimbrel, Ervin Santana and Marcus Stroman also received votes.

Kluber has received Cy Young votes in each of the past four seasons, finished in the top three in three of the past four and won the award in two of the last four. Not bad for a guy who once posted a 5.14 ERA at age 26.

Batters vs. the curveball that helped Corey Kluber claim his 2nd AL Cy Young Award in 2017:

Scherzer put up a 2.51 ERA and 2.90 FIP in 2017 while leading the NL with 268 strikeouts. Although he wasn’t quite as dominant as Kershaw on a rate basis, he threw 25 more innings, which was more than good enough for voters. Scherzer has now won back-to-back NL Cy Young awards after taking home the AL award in 2014 as a member of the Detroit Tigers.

Scherzer, like Kluber, dominated the voting. He gained 27 of the 30 Cy Young votes, while Kershaw received the other three. Ten NL players received Cy Young votes in total, with Stephen Strasburg, Zack Greinke, Kenley Jansen and Gio Gonzalez coming in behind Scherzer and Kershaw.

Here are the pitchers Scherzer joins on the list of three-time Cy Young winners:

Seven Hall of Famers, plus Roger Clemens and Clayton Kershaw. Not too shabby.

And so two incredible pitchers get some more hardware for their mantels. And maybe they’ll get proper recognition as two of the top three pitchers in the game.