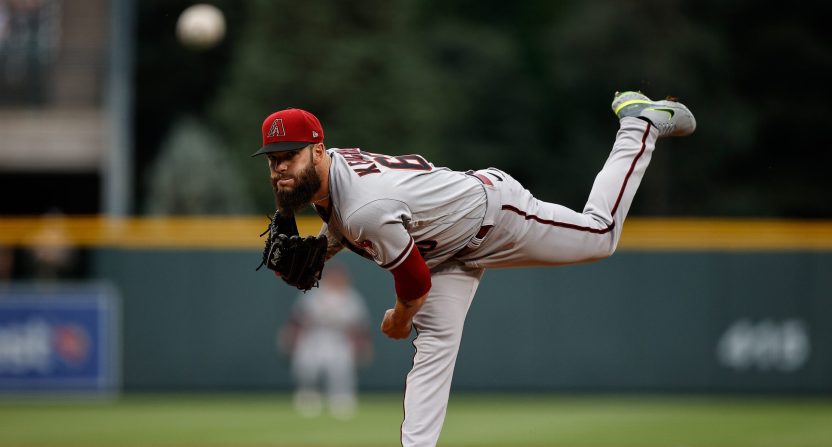 If there were any thoughts that signing with the Arizona Diamondbacks might spark a career rejuvenation for Dallas Keuchel, they are quickly evaporating.

Keuchel struggled in his first inning with Arizona. If there was a positive from that outing, he did do a decent job making bats miss, striking out seven. On the other hand, when he didn’t make the bats miss, the contact was loud. He allowed four runs on six hits and three walks in only 4.1 innings. His second start with the Diamondbacks came on Saturday against the Colorado Rockies — on the road at Coors Field.

Not surprisingly, things did not go well. Keuchel allowed four runs in the first inning, three of which came on a three-run home run from Brendan Rodgers.

Keuchel seemed to settle in well from there, retiring the side in order in both the second and third innings and retiring the first two hitters in the fourth. But then the trouble came back.

Randall Grichuck doubled, then Ryan McMahon and Brian Serven both walked to load the bases for Connor Joe. Joe made Keuchel pay with a bases-clearing triple.

The Rockies are piling on Dallas Keuchel, up 7-2 in the 4th after a bases-clearing triple from our guy. pic.twitter.com/RzdKDWoK9P

Keuchel is a long way from the form he showed when he won the American League Cy Young Award in 2015, something several baseball fans were quick to point out.

Dallas Keuchel is cooked, it seems

batting against keuchel at coors? is that allowed? that sounds like a loophole

Literal BP lol thank you Keuchel for being employed https://t.co/yVUTjtOQCE

I was a fan of the Keuchel move at first, but after seeing him throw twice now, I hate it. He looks terrible. 86-88mph fastballs are not gonna cut it.

It’s hard to imagine he’ll have many more chances if things don’t turn around in a big way.