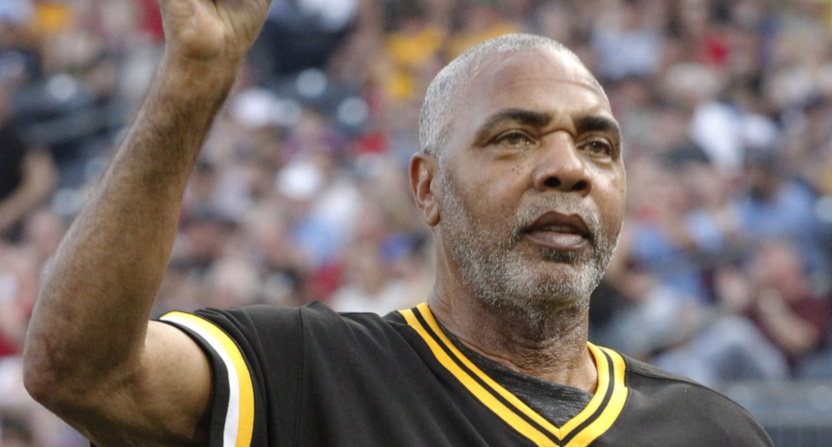 Dave Parker was at least a six-tool player, perhaps even seven, depending on whether charisma and swagger are separate categories. It would have been easy enough for Parker (seen above at the Pirates’ 2019 40th anniversary celebration of their 1979 title team) to write an autobiography that trades on the nostalgia his legend conjures, usually through tweets of the seven-time all-star outfielder wearing a swaggy self-designed T-shirt, smoking a dart in the Pittsburgh Pirates dugout or making a throw from deep in the right-field corner at the Seattle Kingdome to cut down a runner at home plate in the 1979 all-star game, the season of Pittsburgh’s last World Series title.

One gets so much more from that in Cobra: A Life of Baseball and Brotherhood  (University of Nebraska Press), which Parker crafted with collaborator Dave Jordan. Over 447 pages, they give an elegy for a lost era in baseball when the game moved in a more fluid, flowy way than the static 2020s version that has led MLB to realize it has “slow-played itself into an existential crisis,” per Tom Verducci.  That era was correlated with Black representation on MLB rosters being at an all-time high of around 27 percent, three times the current 8 percent.

A lot would have to happen to make baseball look that way again, but hey, we are close to opening day when hope springs eternal.

From 1975 to ’79, Parker was one of only five players to earn at least 30 WAR, along with inner-circle hall of famers George Brett, Rod Carew, Joe Morgan and Mike Schmidt. That half-decade accounts for three-quarters of his 40.2 career WAR. The decline in his numbers and testifying about his cocaine use at the 1985 Pittsburgh drug trials, has diminished his Baseball Hall of Fame chances.

The Pirates organization that Parker starred for was one of the most open-minded organizations for scouting and promoting racialized talent. In 1971, they famously dressed baseball’s first all-BIPOC starting lineup. They often had more gifted batters than roster spots, and perhaps would have benefited if the National League, like the AL, had adopted the DH in 1973. (It might have also saved Parker’s knees some wear and tear.)

The way that Cobra conveys compassion for Parker’s talented minor-league teammates who did not get to climb the ladder, is a reminder that what he and Jordan call a “politics of opportunity” was omnipresent when there were few opportunities for Black players to move into coaching and  management. It is one thing to make room for talent, but marginalized groups also need to be part of an industry’s institutional knowledge. Parker spent his first 15 seasons in the NL, which never once in that time had a first-time BIPOC manager.

Parker went pro in baseball after a Boobie Miles-like misfortune —  trying to play with a knee injury — nixed his dreams to play football at Ohio State. Being a 6-foot-5, 225-pound outfielder with knee damage in the era of multipurpose artificial-turf stadiums wreaking havoc on his joints by his late 20s, around the point that his agent, Tom Reich, negotiated a big contract that led to a backlash against Parker from Pittsburgh fans.

Those are the touches of grey, but Parker and Jordan illustrate why perhaps having every MLB team watch videos of the 1979 World Series-winning Pirates would teach today’s players about why baseball had more cultural clout once upon a time. That was a period when, for many reasons both internal and external to baseball, it was possible to build a championship team whose demographics looked more like North America. (And let’s be clear, the first part is always most important.)

Take the way Parker and Jordan describe the “We Are Family” team that hall of fame power hitter Willie Stargell was the spiritual leader of in ’79: “Pops led ten brothers, eight white dudes, three Panamanians, a Dutch guy, a Mexican, and (Phil) Garner with a big-ass cigar in his mouth.”

Point being, Pittsburgh had an eclectic group of intense competitors who seemed to give zero effs about anything other than winning. Sports fans who are looking for a team they can see some of our common humanity in might identify with that type of ball team more than one that looks like walking actuarial tables with good arm action. It is a way of understanding people, and seeing them as more than what Will Leitch once called “robotic stat compilers.”

It also did not hurt the Pirates ownership in those days was not overly profit-obsessed. Baseball was still a sport in those pre-hypercapitalism days.

Presently, MLB is self-plagued by a lack of action with batted balls and ripping-around-the-bases running. It is going to try using a slightly deadened baseball in 2021, presumably with the intent of disabusing hitters from swinging for the fences and to make pitchers more confident about throwing in the strike zone rather than trying to put too fine a point on nicking corners, which contributes to stretched-out games.

The goal sounds akin to what Parker describes as the “slash and dash” approach of his Pirates teams. Hitters went up swinging, trying to shoot line drives into the gaps. That was tailored to the turf that was, alas, also causing all that joint pain.

In ’79, the Pirates scored the most runs in their league and were first in slugging percentage and extra-base hits, without being first in either doubles, triples or home runs. They were second in both home runs and stolen bases. By comparison, their 148 home runs would have ranked below 29 of the 30 teams in 2019, the most recent 162-game season. Only one 2019 team came within 50 swipes of those Pirates’ 180 stolen bases.

On the SportsLit podcast that I co-host, author Rich Cohen recently noted that competitors “become what is measured.” The context for that observation was a discussion of how youth hockey tryouts, standardized tests and the NFL combine can measure a small skill component, but often fail to capture all-around competency. (Cohen’s latest book is Pee Wees: Confessions of a Hockey Parent, and he is also a Chicago Bears fan who had to watch Mitchell Trubisky’s quarterbacking efforts for the last four seasons.)

Parker does not throw sand in analytics’ face, pointing out that he and his contemporaries were competitors who would have welcomed anything that might have given them an edge against a pitcher. But cross-referencing Cohen’s observation with the differences in 1970s baseball gameplay and 2010s-’20s gameplay contributes to harboring hope that MLB can bring back the game that was around in the late 20th century.

Being a hopeful baseball fan at the dawn of what Deadspin’s Sam Fels has called “the last opening day,” before MLB and the MLBPA’s collective bargaining agreement expires in December, might seem daft. But hope differs from optimism. It means seeing a way toward rebirth. Optimism, on the other hand, is blindly ignoring that MLB will always do the most owner-friendly thing.

Analytics has been a contributing factor to the pace-of-play problems and to MLB teams using it as an excuse not to sign players over age 30, or lowball a franchise fixture like the Chicago Cubs did earlier this week with first baseman Anthony Rizzo. But any change to reboot the 1970s-style game will need Big Data, full stop.

Reading Cobra also ties into a belief that about ways MLB can undo decades of systemic racism since integration. (Yanking the All-Star Game out of Georgia is a no-brainer, which means it might be beyond commissioner Rob Manfred.) One symbolic action would be for the Baseball Hall of Fame to have a real Modern Baseball Committee that will look at players from Parker’s era who might have been overlooked due to race and lack of generally accepted analytics.

It would involve focusing on reconciliation and reconsideration, which are both part of properly recording history.

Parker was on the BBWAA ballot for the maximum 15 years, from 1997 to 2011, but never received more than 24.5 per cent support.  Dave Jordan recently argued on Baseball by the Book that Parker has a “holistic case” to be in the hall of fame, pointing to his fame and role with championship teams. Cincinnati Reds great Barry Larkin also made a point to have Parker, one of his mentors, sit in the front row at his Hall of Fame induction ceremony in 2012.

Of course, more often than not, veterans’ committees have been a bigger hotbed of favoritism than actual critical thinking that involves WAR, OPS+, ERA+ or FIP. And none of the Hall’s various veterans committee has inducted a BIPOC position player or starting pitcher who played in the integration era since first baseman Orlando Cepeda in 1999. (Closer Lee Smith and DH Harold Baines, who had only 39 percent of his career plate appearances as an outfielder, were inducted in 2019.)

The next window of opportunity for Parker and his peers will come when the hall’s modern baseball committee (1970-87) votes in 2023.

If Parker’s not the best outfielder left out of the shrine, well, there are a half-dozen others who were active in that era who are all in the top 150 all-time in career WAR. And each one got about as much traction with the BBWAA as Billy Joel did while he was running on ice:

If you remember any of these players, you might be an Old. Chances are, you might not view them as hall of famers, with the exception of Evans, the only above-mentioned one who is white. But that is kind of the point. The game’s gatekeepers kept them from being more on the radar as hall of fame candidates.

Full credit is due to Parker and Jordan for producing the rare baseball autobiography that puts a reader in the player’s era and makes one think about the game’s present. Cobra reminds one of what baseball had going for it in an era that carried into the 1990s. That is the game Xennials fell in love with, while also cutting their sports-nerd teeth on first-gen analytics.

And that game might yet come back. You never know.

Neate Sager has written for Yahoo! Sports Canada and Sportsnet. He co-hosts the SportsLit Podcast, where he and co-host Neil Acharya discuss the latest sports books with authors and athletes. He also has a newsletter, neatefreaksports.