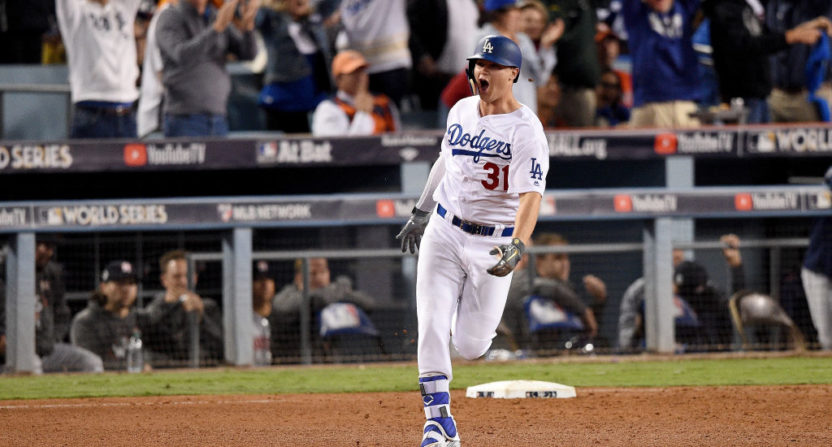 In Game 2 of the World Series, Dave Roberts pulled starter Rich Hill earlier than most managers would, used a crew of relievers through the middle innings, then turned to Kenley Jansen with a 3-1 lead in the eighth inning. The Dodgers wound up losing that game, and Roberts was heavily criticized for lifting Hill so early. The manager, however, defended his process and vowed not to let the poor results cause self-doubt.

So when Hill loaded the bases during the fifth inning of Game 6 on Tuesday, Roberts had a philosophical choice to make. He could abide by the same process and hook Hill early or he could react to the previous results and leave Hill in a bit longer. Roberts trusted the process, so to speak, and lifted Hill. His bullpen once again delivered Jansen a 3-1 lead in the eighth, and this time the closer mowed down the fearsome Astros sweat-free, giving the Dodgers a victory and forcing a winner-take-all Game 7.

For a portion of Tuesday’s game, Los Angeles’ season looked to have reached its end. The Astros scored first, on a third-inning solo home run from George Springer. Two innings later, Hill gave up a single and a double, and a dangerous Houston lineup appeared poised to bust open the game. The lefty struck out Josh Reddick and Justin Verlander, then issued an intentional walk to Springer before Roberts replaced him with Brandon Morrow. On social media and in bars across the country, Dodgers fans scorned Roberts for being too hasty to remove a starting pitcher who had thrown only 58 pitches and allowed only five base-runners. Had Corey Seager followed with a hit and the Dodgers eventually lost, Roberts would have been criticized on every talk radio show and at every water cooler in America on Wednesday morning. Instead, Morrow induced Seager to ground out, and the game remained 1-0.

With Verlander dealing, the Astros still had plenty of cause for confidence. But in the bottom of the sixth, Austin Barnes singled, then Verlander hit Utley with a pitch. To the plate stepped NLCS co-MVP Chris Taylor, who promptly whacked a fastball to right field for a game-tying double. Seager followed with a sacrifice fly (that sure looked like a home run off the bat), earning the Dodgers a 2-1 edge. An inning later, Los Angeles got some insurance, in the form of a Joc Pederson home run that resulted in one of the most joyous trips around the bases you’ll ever see.

Meanwhile, Morrow, Tony Watson and Kenta Maeda worked through the sixth and seventh inning, then handed the ball of to Jansen, who Roberts had promised before the game not to use for more than an inning. As every fan at home and at the ballpark thought back to the Astros’ comebacks in Games 2 and 5, Jansen set down Houston in order in the eighth and again in the ninth. Carlos Beltran, his final victim, went down swinging at a pitch near his eyes.

The victory seems to somewhat vindicate Roberts, who has taken heat throughout this series, some of it justified and some of it less so. But his tendency to pull his starting pitchers early is rooted in evidence, and even if his quick hook hurt him in Game 2 and had lingering ill-effects in Game 3, it sure worked out on Tuesday. Roberts, like every manager, is far from perfect, but he gets credit for sticking to his strategy.

And so a series that has featured enough back-and-forth drama to give every baseball fan in America high blood pressure will come down to a single game. If the World Series had ended Tuesday night, it would have gone down as a memorable series, thanks to close scores in every game and wacky, back-and-forth extra-inning thrillers in Games 2 and 5. With a Game 7 on the way, Astros-Dodgers has a chance to climb the list of memorable Fall Classics.

All signs point toward another great game Wednesday. We’ll get Yu Darvish vs. the Astros’ deep lineup. Lance McCullers against the Dodgers stars. Clayton Kershaw and Dallas Keuchel available in relief. And the urgency of a winner-take-all contest. An all-time great World Series will end exactly the way it should.