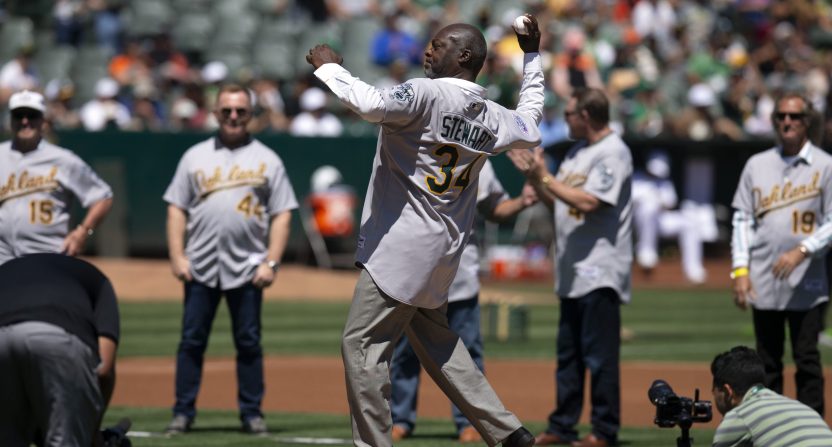 Especially when looking at their years on the West Coast, Dave Stewart is easily one of the most important players in the history of the Oakland Athletics. But he’s not exactly feeling a lot of support from the team.

In 2019, it was announced that the A’s would retire Stewart’s No. 34 during the 2020 season. Those plans changed when COVID-19 truncated the season and forced what games were played to be in front of empty stadiums. But his number was not retired in 2021, either, as the fans came back.

On Tuesday, a fan jumped on Twitter to ask Stewart if the ceremony was still on and if so, when. Stewart’s response was baffling.

I have no idea what the A’s are doing. At this point they can just retire the number with no celebration as far as I’m concerned. Come to the park and it will be on display with the other retired numbers. If you find out something before I do, please let me know? 🙄

That had A’s fans, as well as others in the baseball world, quite upset.

A's making it harder and harder to wear the green and gold. https://t.co/uxAIMcj0CL

Just cause people like John Fisher have money don't mean they have class. https://t.co/hWZz0WvZVs

Just one of many reasons why @DaveKaval is the worst. Sad day when he joined the #Athletics https://t.co/rNplffuSGm

You know there's a baseball term for this, @Athletics @DaveKaval: bush league. https://t.co/JkPUcEYWau

This is unacceptable. It’s one thing to be cheap, it’s another not to have basic common courtesy & respect for 1 of the greatest players to don the Oakland A’s uniform. Dave Stewart’s number retirement ceremony should be a weekend-long celebration, not some last minute event. https://t.co/bZKueoJGuk

The Athletics are a charter franchise of the American League, with a deep history that spans three cities and more than a century. It would be nice if the current stewards the franchise would be more respectful of a player who helped make some of that history. https://t.co/xan4BCixDY

What a sad way for a team to treat its greats. Go A’s! https://t.co/wOjCqZvTzL

This is confounding — on several levels.

For starters, Stewart is absolutely worthy of having his number retired in Oakland. He compiled a 119-78 record for the A’s, won 20 or more games every season from 1987 through 1990 and finished in the top four in American League Cy Young Award voting in every one of those seasons.

Stewart also shone when it counted most. Stewart was the Most Valuable Player in the 1989 World Series. He won two games in Oakland’s sweep of the San Francisco Giants. The following year, the A’s won the American League Championship Series over the Boston Red Sox in another sweep. Stewart won two games. To date, 1989 is the team’s last championship, while 1990 is their last pennant.

The series against either San Francisco or Boston would be a natural time to retire Stewart’s number. Or, since the A’s tend to draw better against those opponents than nearly anyone else, another option would be to leave those series alone and use Stewart’s jersey retirement as a way to draw fans to another game against a more “regular” opponent. It’s not like the A’s couldn’t use the extra fan support.

In addition to Stewart’s significant ties to the franchise’s most recent championship era, he’s also a hometown hero. Stewart was born and raised in Oakland.

And perhaps the most baffling element of all of this is Stewart’s relationship with the A’s. He is one of the hosts of Oakland’s pre and post-game shows on NBC Sports California. It’s not as though he’s some reclusive figure that the A’s would have a hard time getting in contact with.

None of this makes sense. Hopefully for the sake of Stewart and Oakland’s fans, this can get rectified.

Update: Daniel Brown of The Athletic writes that the A’s do in fact have plans for a Stewart jersey retirement ceremony this year:

Updating here, too: Word is that a proper Dave Stewart jersey retirement is in the works for 2022. Cross your Rollie Fingers for an announcement soon about Stew, as well as reunion dates for the ‘72 and ‘02 teams.

We’ll see what happens there.